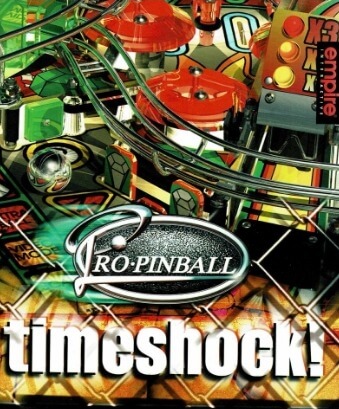 Pro Pinball: Timeshock! is an action video game developed by Cunning Developments and published by Empire Interactive for Microsoft Windows and PlayStation. It is the second game in the Pro Pinball series, and is themed around the concept of time travel.

The inclusion of a time machine fixture on the table facilitates the game's time travel theme. At any one time the player is in one of a handful of time zones, the main ones being The Present Day, The Distant Future, Ancient Rome and The Prehistoric Age. Completion of certain objectives allows the player to travel between time zones (although some must be unlocked first, by means of completing secondary objectives).

Like many pinball games, Pro Pinball: Timeshock! has features around the drains to give the player opportunity to "save" the ball. The left drain features an escape hatch back into the main play area, which, with a well timed nudge one can coerce the ball to travel through. The right drain features a "magno-save": an electromagnet placed just to the left of the right drain, activated by hitting a particular key. If used correctly, this either draws the ball out of the drain, or stops it before it gets there. However, if used recklessly, one can at worst "throw" the ball into the drain, or more likely, waste a good magno-save: Once used, the magno-save must be re-enabled by hitting a set of drop targets.

These features make Pro Pinball: Timeshock! much less of a game of chance. A skilled player can employ these techniques to extend ball times considerably.