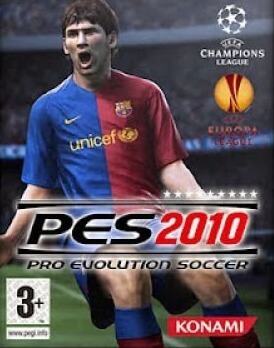 Pro Evolution Soccer 2010 (officially abbreviated as PES 2010 and known in Asia as World Soccer: Winning Eleven 2010) is the ninth football video game in the Pro Evolution Soccer series. The game was developed and published by Konami for release on Sony's PlayStation 2, PlayStation 3, and PlayStation Portable; Microsoft's Xbox 360 and Windows; Nintendo's Wii; and mobile phones.

Lionel Messi (FC Barcelona and Argentine player) is a key endorsement player for PES 2010, having featured extensively throughout the promotion and development of the game. He features on the cover alongside Fernando Torres (Spanish and Liverpool F.C. player), another endorsement player. PES 2010 was succeeded by Pro Evolution Soccer 2011.

The game was released on the iPhone OS in June 2010.

With an exclusive deal with UEFA, both the UEFA Champions League and (for the first time) the UEFA Europa League are fully licensed. The tournaments are integrated into the Master League mode; however, the Europa League is only available on the PC, PS3 and Xbox 360 versions.

Double Fusion signed an agreement with Konami for advertising their clients products in the game.

In total, the game includes 258 squads, with 139 of them being officially licensed. Including the empty league, the game has a total of 55 teams that can be changed completely by user editing.

Like previous versions, there is also a separate league with 18 empty teams (Team A, Team B, etc.), each of which can be edited fully. This was initially introduced when Konami failed to get the rights to the German Bundesliga. Since its introduction, it has become very popular amongst the PES community, and as a result, they are usually made into the Bundesliga or another league of one's preference by patch makers. Popular made leagues are the Liga Sagres, Belgian First Division A, Championship, EFL League One, EFL League Two Liga I, Argentine Primera División or Primera División de México, Greek Superleague and Moroccan Botola Pro.

The game has received positive reviews. Greg Howson of The Guardian gave PES 2010 a favourable review, stating, "it has quickly became obvious that on the pitch — ultimately where it matters most, of course — PES simply plays the more satisfying and entertaining game of football in comparison to FIFA 10. When it comes to the basic on-pitch action there looks to be a clear winner". IGN gave the game an 8.7/10, while PSM3 gave the game an 89. GameSpot, however, gave the PS3 and 360 versions a 6.5.