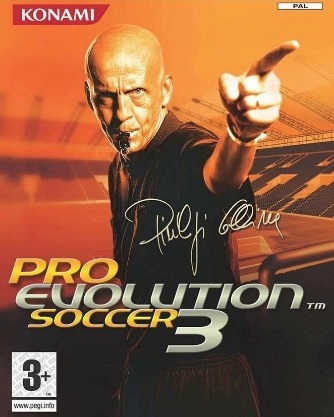 The cover features the image and signature of iconic Italian referee Pierluigi Collina, who had previously officiated the 2002 FIFA World Cup Final. This was unusual, as football games had come to almost exclusively feature only players and managers on their covers; plus, referees only appear in cutscenes in this game (they would only be integrated to the playing field in the next entry of the series). PES 3 was succeeded by Pro Evolution Soccer 4, which was released in 2004.

The game does not include any full leagues but 64 clubs from various European countries. 6 clubs are fully licensed, which are the five Italian Serie A clubs Milan, Roma, Juventus, Lazio and Parma, as well as Feyenoord from the Dutch Eredivisie. All other clubs have fictional team names, logos and jerseys. Also player names are fictional, but only if the player is part of an unlicensed national team. Noticeable cases are for example Dutch players (e.g. Von Mistelroum instead of Ruud van Nistelrooy) and German players (e.g. Kalm instead of Oliver Kahn).

In Europe, the PlayStation 2 version of Pro Evolution Soccer 3 surpassed 1 million units sold by mid-November 2003. It was a significant hit in Italy, which purchased more than 200,000 units in under one month, for revenues of €8 million. The PS2 version ultimately sold 1.16 million units in Japan and 1.55 million units in Europe by the end of 2003. In the United States, it sold 33,403 units by 2005. The PlayStation 2 version of Pro Evolution Soccer 3 received a "Platinum" sales award from the Entertainment and Leisure Software Publishers Association (ELSPA), indicating sales of at least 300,000 copies in the United Kingdom.

The "International" version of World Soccer: Winning Eleven 7 received "universal acclaim" for both platforms in all regions except the European PC version, which received "favorable" reviews, according to video game review aggregator Metacritic.