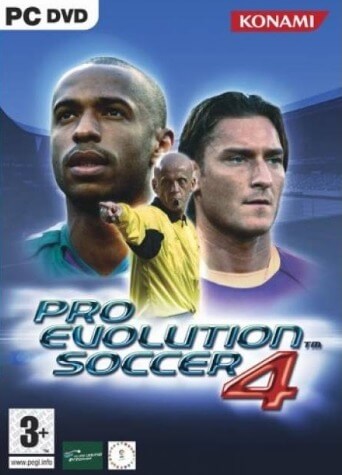 Pro Evolution Soccer 4 (known as World Soccer: Winning Eleven 8 in Japan and World Soccer: Winning Eleven 8 International in North America) is the fourth installment of Konami's Pro Evolution Soccer football video game series. It's the first game of the series to appear on the original Xbox, with online game. The cover features Arsenal striker Thierry Henry, AS Roma forward Francesco Totti, and world-renowned Italian referee Pierluigi Collina. It was the first game in the series to feature licensed leagues.

In Japan, the PS2 version sold 1 million copies on its first day of release, and eventually sold 1.11 million units. In Europe, the PS2 version shipped 1.5 million units on its first day of release. It was a hit in Italy, which purchased more than 400,000 units by late November 2004. The PlayStation 2 version of Pro Evolution Soccer 4 received a "Double Platinum" sales award from the Entertainment and Leisure Software Publishers Association (ELSPA), indicating sales of at least 600,000 copies in the United Kingdom.

The game received "universal acclaim" on all platforms in all regions except the U.S. PC version, which received "favorable" reviews according to video game review aggregator Metacritic.

The Sydney Morning Herald gave the PS2 version all five stars, stating that "There are myriad ways to score, yet goals are always well-earned." The Times also gave the same version all five stars, stating, "The intuitive control system and the fluidity of the movement are of the highest standard and this year’s model includes a bag of new dribbling tricks, which are worth practising in the training mode. Even the referees have received an upgrade." BBC Sport gave the game 95% and said, "Greater emphasis has been placed on one-touch play, and while goals are not all that easy to come by - creating chances requires quick thinking and accurate distribution - when you do manage to make the net bulge, it's all the more satisfying." However, Maxim gave the game a score of eight out of ten and said, "Although it's dogged by Commodore 64-quality music and selective licensing agreements... this new edition more than compensates with killer graphics, new tricks, and an improved dribbling system." Detroit Free Press gave the Xbox version three stars out of four and said that it "really isn't a leap above Winning Eleven 7. Though the variety of play modes is huge, the well-animated visuals could use some polish, the audio sounds rather bland and the number of licensed teams and players is a bit wimpy."