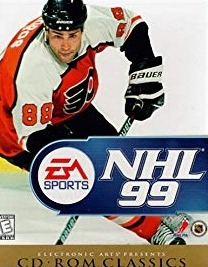 NHL 99 is an ice hockey video game developed by Electronic Arts Canada. It was released on September 30, 1998 and was the successor to NHL 98. The game boasted great improvements to the game from NHL 98. However the next two editions feature small improvements from this game thus making this game similar to NHL 2000 and NHL 2001. It was the first and only installment of the NHL series to be released on Nintendo 64.

Starting with NHL 99 up to NHL 2001 there were very few large 'improvements' to the game. NHL 99 for the PlayStation boasted higher-resolution graphics than NHL 98, but the framerate and unresponsive controls (especially in 2+ player modes) hindered its playability. A career mode (later developed into a Franchise mode) with a retirement feature, drafting, and player trades were added to the game. Furthermore, created players can use any photo for their face which is textured onto the head. Online leagues of the game also became more organized. Daryl Reaugh left the series as color commentator following NHL 99. In the Nintendo 64 version of NHL 99, the official NHL and NHLPA licence with all teams and players are represented, including the Nashville Predators expansion team. It has a Medium-High Resolution at 30 FP, rumble-pack support, and four player mode. The commentary is done by ESPN's Bill Clement.

The introduction features various highlights from the previous season accompanied by "Heroes" by David Bowie.

Next Generation reviewed the PlayStation version of the game, rating it two stars out of five, and stated that "While a purist hockey game is certainly not a bad thing, it's just not that much fun to play, and that's the bottom line."

Next Generation reviewed the PC version of the game, rating it five stars out of five, and stated that "graphics are simply superb. This is the best-looking hockey game on the PC. It's colorful, it's fast, and with a good 3D graphics card, you'll see the ice spray every time a player hits the breaks."

The game received "favorable" reviews on all platforms according to the review aggregation website GameRankings.