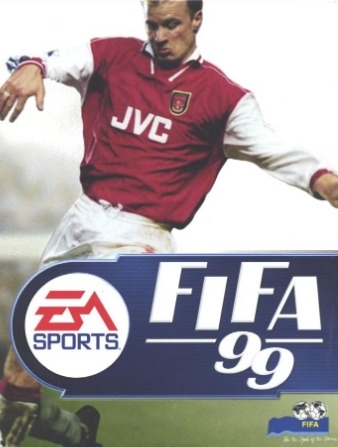 FIFA 99 is an association football video game developed by EA Canada and published by Electronic Arts. It is the fifth game in the FIFA game series and was released on November 30, 1998 for Windows, PlayStation, and Nintendo 64.

While the indoor mode was no longer featured, the gameplay's fluidity and responsiveness was increased. The increasing number of websites dedicated to the game and a larger number of leagues (the Malaysian league was removed, and on its stead came two new leagues: the Belgian First Division and the Portuguese Primeira Liga; this came to be a problem when the owners of the rights to the Primeira Liga tried to pull the game from the shelves locally). Graphically, it is a major improvement over FIFA '98, with the inclusion of basic facial animations and different players' heights as well as certain other cosmetic features such as improved kits and emblems, although they are unlicensed. Gamers may also create their own custom cups and leagues and select the teams they wish to participate.

FIFA 99 also features an elite league called the "European Dream League" in which 20 top teams from across Europe battle it out in a league format. It was also the first game to feature a block containing teams which did not pertain to any of the main leagues (back then, it was known as "Rest of Europe" since all teams were European, the vast majority of them featured either in the 1998–99 season of the Cup Winners' Cup, UEFA Cup or Champions League).

The game was a bestseller in the UK, replacing Tomb Raider III. In February 1999, FIFA 99's PlayStation version received a "Platinum" sales award from the Verband der Unterhaltungssoftware Deutschland (VUD), indicating sales of at least 200,000 units across Germany, Austria and Switzerland. Its computer version took "Gold", for 100,000 sales, at the same time. At the 1999 Milia festival in Cannes, it took home a "Gold" prize for revenues above €50 million in the European Union during 1998.