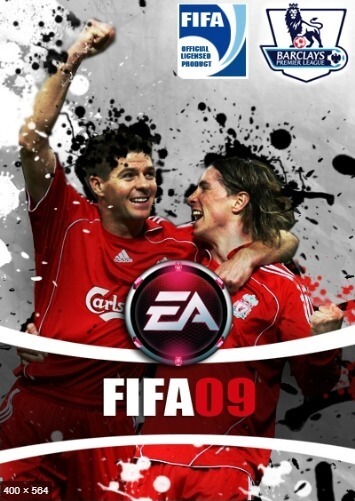 
FIFA 09 (titled FIFA Soccer 09 in North America) is the 2008 installment of Electronic Arts' FIFA series of football video games. Developed by EA Canada, it is published by Electronic Arts worldwide under the EA Sports label. It was released in October 2008 for Windows, Nintendo DS, PlayStation 2, PlayStation 3, PlayStation Portable, Wii, Xbox 360 and Zeebo. It was later in November 2008 released for the N-Gage 2.0 and Mobile phone.

It has been stated in an interview with game producer David Rutter that there are over 250 improvements in the game.

Among the improvements in the new FIFA are improved responsiveness that allows for quicker release of the ball, greater urgency in off-the-ball running, a new jostle system that takes into account the strength of the players when going shoulder-to-shoulder, and subtle animations that enable players to take first-time shots.

Another of the edition's biggest changes is a completely revamped collision system, which calculates speed, weight, and power when the players collide, as each player will have their own individual strength and power statistics depending on their body characteristics.

New goalkeeper technology has also been added which allows for better positioning, better reactions to saves, and faster recovery after a save has been made.

A further improvement from FIFA 08 is the weather and time. Rain and snow matches can be played from Kick-off mode, however there are no weather effects in Manager Mode. Games can be played at either day, dusk or night, depending on the stadium choice.

The "Be A Pro" mode of the game has also been improved. On the PC, Xbox360, and PS3 version, the user can now play four seasons as a single player. The PS3 and Xbox 360 consoles also allow the player to change clubs, and play for his national team, depending on their performance. This feature is not present in the PC version.

On 20 August 2008, EA unveiled the new Adidas Live Season feature that will dynamically update player form and attributes each week, in-game, based on the player's last game to reflect real-world ups and downs. Live Season is a premium service that will be available on PlayStation 3, Xbox 360, and PC and covers six leagues: the Barclays Premier League, the Liga BBVA, the Ligue 1, the Bundesliga, the Serie A, and the Primera División de México. Gamers have access to one league of their choice as a free trial that runs from the moment they activate the service to the end of the 2008–09 season, while purchasing extra leagues will cost £4.99 (US$7.99) each, or all six leagues can be purchased for £12.99 (US$20.00).

User-controlled goal celebrations are also featured for the first time in the FIFA series, having been trialled in the official video game of Euro 2008. The player can choose from a variety of pre-loaded celebrations. This feature is on seventh generation consoles only (excludes PC and Wii) due to capacity limits.

FIFA 09 was updated to correspond with the transfers made in the January 2009 transfer window. This update was added onto the game via an online squad download on 9 February 2009. On 19 March 2009, FIFA 09 was updated to version 13.02 that added the Ultimate Team mode and also Trophies for the PlayStation 3. On 6 June, version 13.03 was released. It fixed various bugs that were caused from the previous patch.

Ultimate Team is a downloadable game mode expansion for FIFA 09 available only on PlayStation 3 and Xbox 360. A similar game mode was featured in a previous EA Sports football game, UEFA Champions League 2006–2007. It lets users create their own teams by buying, selling, trading, and auctioning off their players with thousands of other users. Gamers earn points by playing their teams online or offline or by using Microsoft Points to buy card packs, or you can use coins which you gain from playing matches. Card packs are categorized as Gold (5,000 pts), Silver (2,500 pts), or Bronze (500 pts). Card pack contain random cards, so the user does not know exactly what he or she will get in them. Essentially, Ultimate Team is geared toward letting the user have full, customizable control over their teams. "You can also compete with your squad against others across the world