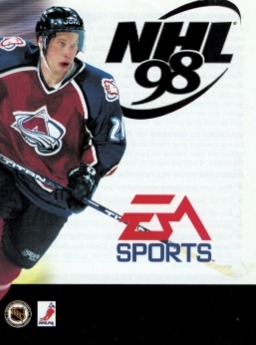 NHL 98 is an ice hockey video game developed by Electronic Arts Canada. It was released on August 31, 1997 and was the successor to NHL 97. It was the last installment of the NHL series to be released on the SNES, Sega Genesis, or Sega Saturn.

NHL 98 took the NHL series ahead by introducing full national teams, although EA could not get the Nagano Olympic Tournament license due to lack of IIHF license, which Gremlin Interactive acquired. The Olympic hockey license itself was acquired by Midway Home Entertainment. Jim Hughson returns for play-by-play, this time joined by Daryl Reaugh, who provided color commentary. EA Sports also introduces 3Dfx Glide support for the first time in the NHL series. The SNES and the Genesis versions are the final games in the series to be released on 16-bit consoles. Despite his career ending injury, Vladimir Konstantinov was featured on the game. The Sega Saturn version also has Mario Lemieux in it. He retired at the end of the 1996–97 NHL season, yet was still included in the game.

During the planning stages of development, EA Sports consulted with Marc Crawford (then coach of the Stanley Cup-winning Colorado Avalanche) on how to improve the realism and strategy of the gameplay.

Next Generation reviewed the PlayStation version of the game, rating it four stars out of five, and stated that "NHL '98 is a very good game and just that much better than the rest of the competition."

NHL 98 was a runner-up for Computer Gaming World's 1997 "Sports Game of the Year" award, which ultimately went to Baseball Mogul and CART Precision Racing (tie). The editors called NHL 98 "the latest and best ... in EA's awesome action-oriented" series.

NHL 98 was a finalist for the Academy of Interactive Arts & Sciences' 1997 "Personal Computer: Sports Game of the Year" award, which ultimately went to FIFA: Road to World Cup 98.

In 1998, PC Gamer declared it the 17th-best computer game ever released, and the editors called it "quite simply the most entertaining sports game around".