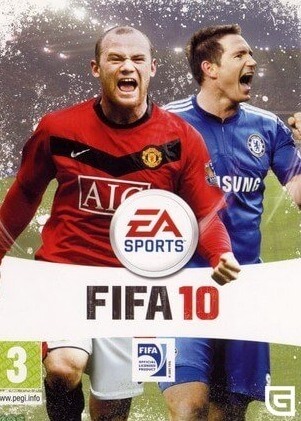 
FIFA 10 (FIFA Soccer 10 in North America) is the 17th title in EA Sports' FIFA series of football video games. Developed by EA Canada, it was published by Electronic Arts worldwide under the EA Sports label. It was released on 2 October 2009 in Europe, 1 October in Australasia and 20 October 2009 in North America. It is available for the PlayStation 3, Xbox 360, Microsoft Windows, PlayStation 2 and Wii. Handheld versions of the game were also released for the iOS, Nintendo DS, PlayStation Portable, and mobile phones.

The demo of FIFA 10 appeared on Xbox 360, PlayStation 3, and PC on 10 September in Europe, on 11 September in Australasia, and on 17 September in North America. The playable teams were Chelsea, Barcelona, Juventus, Bayern Munich, Marseille and Chicago Fire. The stadia used in the demo were Wembley Stadium (Xbox 360 version), and FIWC Stadium (PlayStation 3 version). The demo offered friendly matches with half lengths of three real-time minutes. As well as playing a friendly match, the demo allows users to upload created in-game videos and screenshots to EA Football World. The tagline for the game is "How big can soccer get?", and "Let's FIFA 10". Commentary is available in 12 different languages, with each language boasting around 25,000 phrases. The English version features British commentators Martin Tyler and Andy Gray, while Clive Tyldesley and Andy Gray were still become as commentator in PC, PS2, Wii and PSP.

FIFA 10 is the second version of the game to sponsor a football club. Along with football magazine FourFourTwo, FIFA 10 is the co-sponsor of English League One club Swindon Town. The FIFA 10 logo appears on the front of the team's away shirt and on the back of the home shirt. It is the first FIFA game to do so since FIFA 07, which sponsored Accrington Stanley for the 2007–08 season.

Manager Mode enables the player to take charge of any club in any of FIFA 10's featured leagues.

The Manager Mode has been revamped for FIFA 10, with many previous issues and criticisms addressed. EA has claimed that over 50 key improvements have been made to the PlayStation 3 and Xbox 360 versions. Among these improvements are:

The "Total Football Experience" is a new feature in which football news from around the Manager Mode world is visible, including player transfers, fixtures and results in foreign leagues. A new "Assistant Manager" can be used to take care of the team's line-up and to rotate the squad based on importance of the upcoming match. For example, if the next match is against a low rated team, he will make sure that players normally on the bench will start the match. Pre-season friendlies have been introduced to the Xbox 360 and PlayStation 3 versions of the game, as a chance to flatten out any wrinkles in a team's lineup before the domestic season begins.

Results for simulated matches are more heavily based on team strength and do not appear to be as "random" as has been the case in the past. This results in more realistic performances and eliminates instances where stronger clubs would be fighting relegation and clubs with weaker players were winning the league. Non-player clubs also now rotate players more often based on factors such as fatigue, player form, and the relative importance of a match, so the lineup for a top team in the early rounds of a domestic cup may consist of less-able and younger players as opposed to a full-strength squad. The names of the "generic" stadia can be changed in Manager Mode to reflect the name of the player's club's home ground.

All financial matters are based less on a team sponsor and more on the club's board of directors, who provide two overall budgets: The wage budget, a yearly amount for paying players, and the club budget, for buying and selling players as well as making other improvements to the club. There is a "Board Difficulty" setting, which determines the financial generosity of the board.

The transfer system has been made more authentic, as money is no longer the monopolizing factor in acquiring a player. The acceptance of an offer will be based on factors such as the number of players in the squad in the same position. If the club accepts, the manager has the choice of which, if any, of the players to ultimately sign.

The "Player Experience and Growth System" has changed. The manual experience growth from FIFA 08 and FIFA 09 has been abolished; player growth will now be determined by in-game performance, demands placed on the player, and achievements based on the player's particular position. There are three categories for gaining experience: "mental", "physical", and "skill". Younger players with higher potential will gain experience much faster, and each player will have an individual growth point, which in turn promises more authentic player growth patterns.

Fictional players that are added to Manager Mode by the game itself now have regionalised names, so for example a player from Brazil will not have an English-sounding name.

"Virtual Pro" allows the player to create a footballer and take him through the four Be a Pro seasons, include him in the Manager Mode career, use him in Kick off, Tournament, and Lounge mode, as well as using him in the Arena. Game Face has also been added to FIFA 10 as in other EA Sports games, where gamers can create their Game Face on the web at easports.com or easportsfootball.co.uk, then download them into the game. Once a Game Face character is created, he can then be applied to the player in game. Faces can be changed on the web any time. The game face is used as the player's avatar in online play. Players can also grow their players attributes and player traits, celebrations, and kit can be unlocked to make the player realistic and unique. A created player can also be taken online to play with friends in the Fifa Clubs mode.

The list of stadia and weather conditions for each one were announced on 27 August 2009. The game features 50 stadia, including most of the larger stadia from Europe's most prominent leagues, such as the Allianz Arena, Camp Nou, Emirates Stadium, Anfield, Old Trafford, Stamford Bridge and San Siro, and as well as a range of generic stadia and practice arenas. Real Madrid's Santiago Bernabéu was made available as a free download on launch day. The weather conditions possible in each stadium range from day and night versions of clear to cloudy, rain, or snow.

The stadium names of the generic stadia, however, can be changed in a special section of the main menu to reflect the name of the users club's homeground if the user chooses to do so. The capacity of each ground is also listed so that a capacity similar to a club's actual stadium capacity can be chosen to make game experience more authentic.