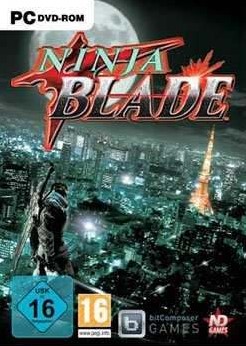 Ninja Blade (ニンジャブレイド Ninja Bureido) is an action game developed by FromSoftware for Microsoft Windows and Xbox 360 in 2009.

The player plays as a modern-day ninja, using a katana, twin swords and broad sword as the main weapon to the hostile creatures. Combat system is similar to Ninja Gaiden or Devil May Cry. A chi bar is used up when "ninja vision" or ninjutsu is used. The gameplay is highly cinematic, relying on quick time events to finish missions; after attacking a boss until the health bar is empty, the player must perform a finishing move, called the todome.

In 2011, the inhabitants of a small Northern African village are infected by an unknown hookworm parasite, classified as "Alpha-worm", which alters its hosts' bodies and minds while increasing their strength and resilience. To prevent an outbreak, the military raid the quarantine zone and exterminate the infected, while the incident is covered up by the government. Military intelligence forms a containment task force called GUIDE (Global United Infestation Detection and Elimination), recruiting operatives from around the world.

Four years later, a GUIDE ninja team, including the young Ken Ogawa and led by his father Kanbe, is dispatched to Tokyo to contain a massive Alpha-worm outbreak. Following Kanbe's trail, Ken chases and defeats an Arachne creature, however Kanbe and fellow team member Kuroh, having been infected by King Worms, slaughter the entire unit. Kanbe runs Ken through with the clan's 'Ninja Blade', narrowly missing his heart — something a master swordsman could only do on purpose. After a quick recovery, Ken is dispatched solo back to the city.

As Ken eliminates other major Alpha-worm Carriers, he is informed that the military are considering a mass sterilization of Tokyo via orbital laser cannon, which will sacrifice its entire population. He then pursues two more King Worm hosts, a father-daughter pair of Yakuza bosses Oyabun and Ryoko Kurokawa. After defeating both, Ken witnesses Ryoko momentarily regain her sanity and beg for a mercy killing, which re-ignites hope in Ken that he may still save his father.

After thwarting an attempt to spread the infection overseas through a plane carrying evacuees, Ken learns that Kuroh has attacked the local shopping mall and rigged the Tokyo underground with explosive Carriers called Blast Mites. Ken disposes of the Mites, catapulting the last one into the air out of harm's way. The bombing, however, was meant as a distraction to allow Kuroh to lead a strike team of Carrier military operatives into the GUIDE headquarters. All GUIDE personnel, including director Michael Wilson, are taken hostage. With the help of Wilson himself, Ken manages to rescue the hostages, after having to kill his former teammates turned Carriers. In a final confrontation with Ken, Kuroh reveals that Ken was not born but made in a military lab with the goal of wiping out the Alpha-worms, hence his immunity to the parasite. Kuroh also reveals that both he and Kanbe infected themselves with King Worms intentionally, Kuroh having done so out of craving for the power bestowed by the parasite.

Kanbe rescues Ken from a suicide attack by Kuroh, whereupon he confirms he volunteered to be infected, but only so that he could infiltrate and locate the Alpha-worm hive, which was buried underground to escape sterilization. Ken goes underground and eventually finds the hive, however he is unable to use the Ninja Blade to destroy it. A now controlled Kanbe challenges Ken on top of the Tokyo Tower. Before Ken can finish him, the hive absorbs Kanbe, thus transforming into a colossal version of him which begins laying waste to the city. Ken chases down and attacks the mutant Kanbe, weakening him enough for Ken to enter the hive and attack its core, which manifests itself in Kanbe's shape again. Ken defeats the core using the Ninja Blade and finally brings peace to his father, then the hive crumbles along with every trace of the infection.

Months later, Tokyo is being rebuilt after the whole incident is again covered up by the government and media. Wilson reforms GUIDE and appoints Ken to train and lead the new recruits in the event of a new outbreak.