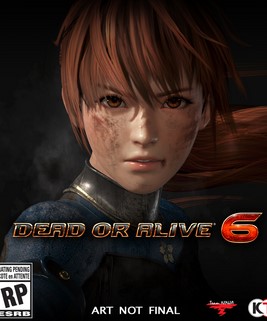 Dead or Alive 6 is a fighting game developed by Team Ninja published by Koei Tecmo in the Dead or Alive series as a sequel to Dead or Alive 5. The game was released for Microsoft Windows, PlayStation 4, and Xbox One on March 1, 2019. DOA6 was praised for its polished gameplay, battle arenas, and its beginners-friendly tutorials, but was criticized for its multiplayer functions as well as the absence of lobby mode on online mode at launch. A DLC story is in development.

New features include slow-motion moments and visible damage on the fighters during the course of the fight, while the sweat effects from Dead or Alive 5 return and are more pronounced. Dead or Alive 6 also marks the first time for the series to have costume customization mode. Contrary to some early reports, breast physics however are still part of the game, but can be user-adjusted just like the game's new blood and violence options.

The game is supposed to be more accessible for newcomers. New mechanics introduced are the Fatal Rush, a beginner-friendly mechanic where pressing one button multiple times results in the character performing a simple combo, and the Break Gauge, a meter that builds up as the characters attack. If the Gauge is full, a Fatal Rush will culminate in a move similar to what the Critical Blow in Dead or Alive 5 would do. There is a new mechanic named the Fatal Reversal, where the character reverses an opponent, stunning them, before appearing behind them, open for a counter. The juggling ground-bounce system in this game is also being enhanced to extend juggle combos.

The game currently has 29 (including palette swap) playable characters. According to the developers during an interview, it will not feature the characters who were introduced in Dead or Alive Xtreme 3 Venus Vacation and Scarlet. Possible future DLC characters include Momiji from Ninja Gaiden. There will also be two SNK guest characters, including Mai Shiranui returning from Dead or Alive 5 Last Round. The other SNK guest for the collaboration promoting the fourteenth installment of The King of Fighters game was later confirmed to be Kula Diamond.