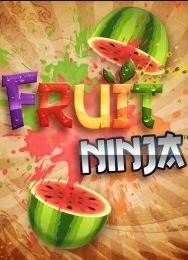 Fruit Ninja is a video game developed by Halfbrick. It was released April 21, 2010 for iPod Touch and iPhone devices, July 12, 2010 for the iPad, September 17, 2010 for Android OS devices. It was released for Windows Phone on December 22, 2010. Also, in March 2011, versions for Samsung's Bada and Nokia's Symbian began to be distributed on their respective application channels. Just prior to E3 2011 Fruit Ninja Kinect was released for the Xbox 360 on August 10, 2011 and utilizes the Kinect peripheral. Fruit Ninja was also released for Windows 8 on June 7, 2012. Versions with alternative names exist, such as Fruit Ninja HD on the iPad, Fruit Ninja THD for Nvidia Tegra 2-based Android devices, Fruit Ninja VR for HTC Vive and PlayStation 4, and an arcade version called Fruit Ninja FX. In the game, the player must slice fruit that is thrown into the air by swiping the device's touch screen with their finger(s) or in the case of the Xbox 360 version, the player's arms and hands. It features multiple gameplay modes, leaderboards and multiplayer.

The game was well received by critics; in September 2010 sales exceeded three million downloads, four million in December 2010, and over 20 million across all platforms in March 2011. In May 2012, Fruit Ninja reached 300 million downloads. Reviewers felt that the low cost of the game combined with addictive gameplay yielded an excellent value. They further lauded the support and updates provided by Halfbrick, who brought online multiplayer, achievements, and leaderboards to the game. Some critics felt the game's difficulty curve was uneven.

In Fruit Ninja, the player slices fruit with a blade controlled via the touch screen. As the fruit is thrown onto the screen, the player swipes their finger across the screen to create a slicing motion, attempting to slice the fruit in half. Extra points are awarded for slicing multiple fruits with one swipe (called "combo"s) , and players can use additional fingers to make multiple slices simultaneously. Players must slice all fruit; if three fruits are missed, the game ends, (Unless Calligraphy Brush is used) but upon reaching scores that are multiples of one hundred (i.e. 100, 200, 300, etc.), the player will gain an extra life (unless they have not missed a piece of fruit already). Bombs are occasionally thrown onto the screen, and will also end the game should the player slice them. (Unless Bomb deflects are used)

A mode known as Zen mode allows players to seek high scores without the hindrance of bombs appearing on the screen, but players only have a minute and thirty seconds. Also available is an Arcade mode in which players have only sixty seconds to achieve a high score. Special bananas are added to the standard fruit which have unique bonuses such as doubling points scored for a limited time, increasing the amount of fruit on the screen, or slowing down the movement of all fruit for a short period of time. There are also bombs that deduct 10 points from the player's score. In Classic and Arcade mode, special pomegranates are occasionally thrown on screen. In Arcade Mode, it is guaranteed that at the end of each game that a pomegranate will appear. Players can slice these multiple times to get extra points. Similarly, an ultra rare dragonfruit sometimes appears in Classic mode which, if sliced, awards players fifty points.

When Fruit Ninja celebrated its second anniversary, Halfbrick released an update with a new feature called Gutsu's Cart, which comprises two characters, a pig named Truffles and a human named Gutsu. In the various modes of the game, the player can earn starfruit to purchase items in Gutsu's Cart. There are three purchasable items at the cart which are used in the game; Berry Blast causes sliced strawberries to explode and gives the player five extra points. Another item is Peachy Times: slicing a peach in Zen or Arcade mode gives the player two extra seconds. The third item is Bomb Deflects which enables the player to deflect Bombs upon accidentally slicing them. Starfruit can be obtained after each game, proportional to the score, or by slicing the semi-rare starfruit.

In the fifth anniversary update to Fruit Ninja, Gutsu's Cart was removed and instead replaced with a power-up menu that used starfruit to buy the three power-ups in the game. Berry Blast power-ups were priced at 120 starfruit, Peachy Times power-ups were priced at 100 starfruit, and Bomb Deflect power-ups were priced at 80 starfruit. In addition, certain dojos and blades now had different effects that took place within the Classic, Arcade, and Zen game modes. For example, if a player owned the Cherry Blossom dojo, the power-up costs were 50% off. A new festival mode was added in as well, where players could compete against the game's artificial intelligence by paying Gold Apples to challenge an AI player. There were also mini-games added to challenge the skills of newcomers and experts alike.

Multiplayer gameplay is supported on iOS devices through Apple's Game Center application. It allows for competitive gameplay and features leaderboards and achievements. During multiplayer matches the player's blade and fruit are highlighted in blue, while the opponent's are highlighted in red. White outlined fruit are considered neutral and may be claimed by either player. White outlined fruit are worth three points. Players must slice their own fruit while avoiding their opponent's fruit. The iPad version of the game features enhanced graphics and also supports local multiplayer, with the screen being divided in half and each player controlling half of the screen. Players can also share high scores via OpenFeint, Twitter and Facebook.

Fruit Ninja was well received by critics and consumers. The game has an average score of 75 out of 100 based on 12 reviews on Metacritic, indicating "generally favorable reviews", and 87% based on 5 reviews on GameRankings. It was also named one of Time magazine's 50 Best iPhone Apps of 2011.

Reviewers were mostly unified in the overall fun factor in the game. Levi Buchanan of IGN stated that the game was "fun, fun, fun" and "an instant pleasure". Slide to Play's Chris Reed agreed and felt that the game was perfect for when a consumer has short moments of boredom. He likened this to playing the game while waiting in line for something and stated "it'll slice the time in half." Jim Squires of GameZebo felt the gameplay was simple and addictive. Geoff Gibson of DIYGamer stated that he could see Fruit Ninja "becoming the next "big thing" on the App Store." Several reviewers praised price and Halfbrick's commitment to continual updates to the game. GameZone's James Pikover stated "perhaps the best part is that this game isn't even complete." He then spoke of the future game modes to be made available and lauded the value-to-price ratio. App Spy's Andrew Nesvadba agreed that Halfbrick's commitment and updates were "nothing short of spectacular." He also praised the game's graphics and said they were "luscious". The reviewer from BuzzFocus praised the game's inexpensive price and said consumers "should really be downloading this app right now."

The game's scoring system and difficulty were received to mixed commentary. Chris Reed of Slide to Play felt that there should have been an option to increase the game's difficulty curve. Andrew Nesvadba of App Spy felt that since the bonus items were random the ability to beat a high score was made more difficult. DIYGamer's Geoff Gibson also shared this sentiment. James Pikover of GameZone, Geoff Gibson of DIYGamer and Levi Buchanan of IGN all praised the game's ability to boast scores to friends and family via Facebook and Twitter.