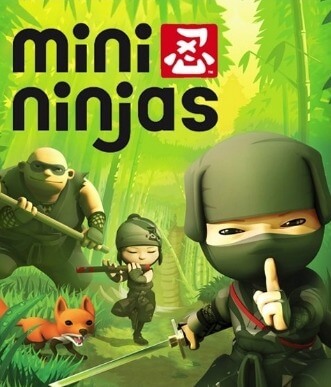 Mini Ninjas is a 2009 action-adventure game developed by IO Interactive and published by Eidos Interactive for Microsoft Windows, Nintendo DS, PlayStation 3, Wii and Xbox 360. A Mac OS X version of the game was released on July 8, 2010, by Feral Interactive. In December 2011, it was announced that the game will be also made available as a browser game for Google Chrome.

A Shield Android TV port was released in 2017.

Mini Ninjas is a linear third-person action-adventure game. It features six playable Mini Ninja characters, each with their own unique abilities, weapons and skills. Players can collect special weapons, including caltrops, shuriken, different bombs and fishing rods, and a multi-functional ninja hat, as well as a variety of potions and food items. The main protagonist, Hiro, can cast spells, including fireball and lighting attacks, camouflage, and time manipulation. Hiro can also possess spirits, such as animals, for a short period of time. Spells are cast using Ki, which is dropped by enemies and can be replenished with potions.

The enemies in Mini Ninjas are animals enchanted by the main antagonist. When defeated, the curse is broken and the enemies return to their previous animal form, and can assist the player. For example, brown bears can attack with their claws, warthogs charge at enemies, and panda bears can slam into the ground. All animals have a keen sense of smell for spotting ingredients and collectibles in places that are easily overlooked.

Throughout their journey, players can collect coins and ingredients, such as mushrooms, flowers, and ginseng roots. They can exchange these coins for weapons and recipes from the Tengu, crow-like humanoids who also give quests and advice. Fruits found on trees or bushes can be harvested by shaking the bushes or the trunk of trees, which will restore their health. Other foods like sushi do the same thing.

Scattered throughout the world are ancient shrines, each containing a scroll that grants Hiro a new spell. There are also 100 Jizo statues hidden throughout the game, which can be collected for special achievements or trophies.

Mini Ninjas was announced on January 19, 2009, along with the first official trailer. The game's origin lies in the developers' desires to make a game that they could "play with their kids".

GameSpot review rated the game a 7.5 out of 10, saying: "Whether you're big or small, there's a lot to like about these little ninjas and their lengthy journey." IGN gave the PS3 version of the game an 8 out of 10, finding this "family-friendly ninja affair" to be "an extremely pleasant surprise". The Guardian awarded the game 4 out of 5 stars, concluding that the game's "constant charm renders it calming and even relaxing to play" and "any parent watching Mini Ninjas being played will find it hard to resist the temptation to have a go over their own."

Tora was featured among the top ten ninja characters for PlayStation consoles by PLAY in 2011, while Hiro was chosen to illustrate a similar list by Cheat Code Central. In 2012, CraveOnline included Mini Ninjas on their list of five "badass ninja games" as "a quality ninja game that can be enjoyed with the whole family kids", adding that its "best aspect was, without a doubt, how slain enemies burst into cute animals instead of blood clouds. Super adorable."