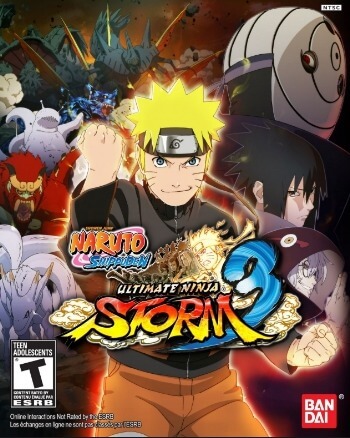 Naruto Shippuden: Ultimate Ninja Storm 3, known in Japan as Naruto Shippūden: Narutimate Storm 3 (Japanese: NARUTO-ナルト- 疾風伝 ナルティメットストーム3 Hepburn: Naruto Shippūden: Narutimetto Sutōmu 3), the fourth installment of the UltimatStorm series, is a fighting game developed by CyberConnect2 as part of the Naruto: Ultimate Ninja video-game series based on Masashi Kishimoto's Naruto manga. It was released for PlayStation 3 and Xbox 360 by Namco Bandai Games on March 5, 2013 in North America, March 8, 2013 in Europe, and April 18, 2013 in Japan.

The story focuses on the conflict between ninjas from all the villages and the terrorist organization known as Akatsuki as a world war starts between the groups. Its gameplay retains elements of Ultimate Ninja Storm 2 (such as quick time events), adding hack and slash scenarios and options to increase battle difficulty. A re-release (Naruto Shippuden: Ultimate Ninja Storm 3 Full Burst) was released on October 22 and 24, 2013 in North America and Japan, respectively. Its European version was released over three months later, on January 31, 2014.

The game had positive reviews and good sales, surpassing its predecessors from the series. Critics praised the return of boss battles from Storm 2, the Ultimate Decision mechanics and improved graphics and controls. Reception of story-mode development, based on the number of cutscenes, was mixed. Lack of depth in the fighting mechanics and the under-use of hack and slash were criticized. A sequel, Naruto Shippuden: Ultimate Ninja Storm 4, was released in 2016. In 2017, CyberConnect2 re-released it again with the first two Storm games as a trilogy. The game was also released online that year.

The game has mob battles, in which the player controls a character who must battle a series of enemies. In this mode, controls from regular fights are retained and the player can transport to another enemy after they defeat one.

Ultimate Ninja Storm 3 begins with the attack of the Nine-tailed Demon Fox of the Konohagakure ninja village while its former leader, Third Hokage Hiruzen Sarutobi, tries to stop it. The current leader of Konohagakure, Fourth Hokage Minato Namikaze, faces the masterminds behind the attack: Madara Uchiha and the fox. The story then moves to some time after Ultimate Ninja Storm 2's; the five leaders of the ninja village face Sasuke Uchiha, who intends to kill acting hokage Danzo Shimura. Madara saves Sasuke and declares a world war against the ninja forces. In the next chapter, Sasuke's former comrades from Konohagakure try to kill Sasuke until Naruto Uzumaki convinces him to have a death match. Naruto trains to obtain the power of the fox with the help of Killer Bee and the spirit of his mother, Kushina Uzumaki. The fourth ninja world war begins, with the ninjas facing the Madara's army of Zetsu and Kabuto Yakushi's reanimated warriors. When Naruto and Killer Bee go to war, Kabuto revives the original Madara Uchiha and reveals that the "other Madara" is an imposter. While the five Kages make Madara retreat, Naruto defeats the fake Madara forces. After the story mode's ending, a side story reveals that Sasuke is joining the war. He changes sides when he allies with the reanimated body of his brother, Itachi, to defeat Kabuto and send his forces to the afterlife.

The game has been well-received, with an average score of 77/100 on Metacritic for the PlayStation 3 version and average of 70/100 for Xbox 360 version. IGN praised its improvements over its predecessors in gameplay and story-mode action scenes. Its cinematic boss battles were praised, particularly those exploring the series' background. Its story presentation was contrasted with its predecessor, Storm 2. Despite finding Storm 3's plot inferior to Storm 2, Destructoid still found it one of the best anime-based games based on its graphics and fights. Other sites had mixed responses, due to the amount of dialogue and length of cutscenes. GameTrailers felt that the exposition and lack of visual appeal made Storm 3 fail to show the manga and anime's appeal; its fighting system was simplistic and its soundtrack unsuitable. However, Play called it the best Naruto game ever released.

The addition of Decision Mode was well-received, since it could increase the game's difficulty. Noting that newcomers might not understand the game's plot, retellings might make it easier to grasp. Gaming Age appreciated the graphics and cast, saying that it surpassed Level-5's Ni no Kuni. Although hack and slash was more entertaining than Ultimate Ninja Impact's, its scarcity was criticized. Despite the number of characters, the combat's technical depth was also criticized. Gaming Union found the story's presentation similar to Storm 2, with limited exploration and few side quests.