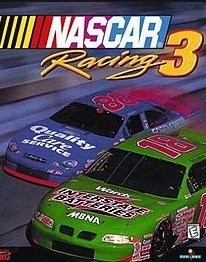 NASCAR Racing 3 is a racing simulator produced by Papyrus Design Group and published by Sierra Sports for Microsoft Windows in 1999.

Players can compete in the 1999 NASCAR Winston Cup Series and the 1999 NASCAR Busch Series. The game's multiplayer was powered by the World Opponent Network(WON), but is now inaccessible by this method after the end of WON servers in 2000. The game had an expansion called Craftsman Truck Series Expansion. Patches are available for updates for both the main and expansion games on the Sierra Entertainment website.

NASCAR Racing 3 was released to largely positive reviews: IGN gave it a 9.2, GameSpot a 9.4, amongst other high ratings.

NASCAR Racing 3 won GameSpot's 1999 "Driving Game of the Year" award. The editors called it "as ambitious as driving games get." It was also a nominee for CNET Gamecenter's "Best Racing Game" award, which went to Need for Speed III: High Stakes.