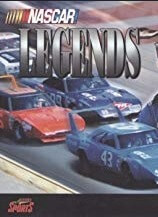 NASCAR Legends is a NASCAR racing simulator developed by Papyrus Design Group for Windows-based personal computers and released by Sierra On-Line in late 1999. It was based on the 1970 NASCAR Grand National Series (the precursor to the Monster Energy NASCAR Cup Series), and featured drivers, cars, and venues from that year. The game used the same game engine as NASCAR Racing 3. However, the game play reflects the performance of the 1970 race cars.