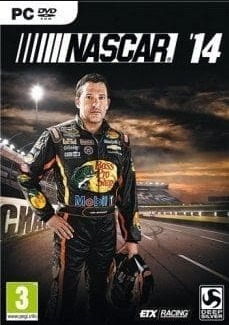 NASCAR '14 is a NASCAR video game. It is the third edition of the NASCAR The Game racing simulator series, and is the sequel to NASCAR The Game: Inside Line. Developed by Eutechnyx and published by Deep Silver, the game was released on February 18, 2014, for the PlayStation 3, Xbox 360, and PC.

For the second straight year, Eutechnyx held a "drive for the cover" campaign, allowing fans to vote for the NASCAR driver they would like to see on the cover of NASCAR '14. On December 10, 2013, it was announced that Tony Stewart was chosen as the game's cover driver, succeeding Dale Earnhardt, Jr.

New features for the game will include online leagues, a server browser, DNFs, enhanced AI difficulty, the option to hire staff in career mode, and new car physics.

Driver rosters and paint schemes for the 2014 season were updated, with DLC being released on a monthly basis. The game also features all 23 NASCAR Sprint Cup Series tracks.

The game has received mixed reviews. Jeremy Peeples of Hardcore Gamer gave the game a 3.5/5, saying "There’s a lot of fun to be had in the career mode tinkering with settings and getting things just right for a race, while the core racing action is quite exciting in any mode."