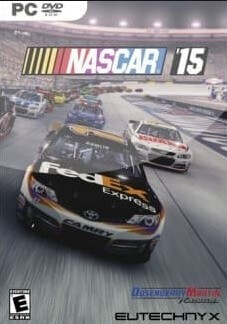 NASCAR '15 is a NASCAR video game, the fourth installment in the NASCAR The Game series and an update to the preceding NASCAR '14. Developed by Eutechnyx, and published by new NASCAR video game licensee Dusenberry Martin Racing, it is available on the seventh generation PlayStation 3 and Xbox 360 consoles as well as Microsoft Windows. Physical copies of the console version are available at GameStop stores (EB Games in Canada), with digital downloads available on the PlayStation Network and Xbox Live. Steam is selling the game for Windows PC.

To promote the game, DMR signed several NASCAR drivers as "Game Ambassadors," including Erik Jones (as part of a promotion with GameStop), Joey Logano, Ryan Blaney, Darrell Wallace Jr., and Matt Tifft. In September 2015, DMR announced an updated version of the game called NASCAR '15: Victory Edition, which included all paint schemes and DLC and all patches, for release in October. It was released at no additional cost for those who purchased the original version of the game.

The 2015 cover features four-time Sprint Cup Series champion Jeff Gordon, who was in his 23rd and final year running a full-time Sprint Cup schedule. He replaced Tony Stewart from the 2014 cover. The "Victory Edition" features 2015 Daytona 500 winner Joey Logano on the cover.

In addition to several patches to fix issues within the game, three DLC packs were announced in May to add more paint schemes to the game. The DLCs were intended to be released worldwide on the week of July 13, 2015. However, the release was delayed until mid to late-August.