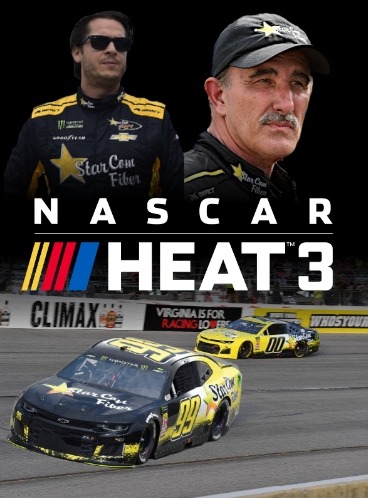 NASCAR Heat 3 is a racing video game simulating the 2018 NASCAR Cup Series and feeder competitions. It was developed by Monster Games and published by 704Games. It is the sequel to NASCAR Heat 2, and was released in North America and Europe on September 7, 2018 for the PlayStation 4, Xbox One and Microsoft Windows via Steam. Hendrick Motorsports drivers Jimmie Johnson, Chase Elliott, Alex Bowman and William Byron are featured on the cover. Along with the game announcement, a new Xtreme Dirt series was also announced as part of an enhanced career mode.

Like NASCAR Heat 2, the career mode option for the game includes the option to play in the Monster Energy NASCAR Cup Series, NASCAR Xfinity Series and NASCAR Camping World Truck Series. Additions for the third installment include a new Xtreme Dirt Tour and the option to manage your own team in NASCAR national series competition. The Xtreme Dirt Tour emulates the feel of local dirt track racing, with a variety of new tracks. Notable new tracks include a dirt version of Bristol Motor Speedway and tracks originally featured in NASCAR: Dirt to Daytona that have received graphical updates. The Charlotte Motor Speedway road course is also available to play at in the Bank of America Roval 400 event.

On December 6, 2018, NASCAR, the Race Team Alliance and 704Games announced the creation of the eNASCAR Heat Pro League, an esports league for NH3. Interested players needed to qualify for a draft through a special set of online races. The draft was made up of teams owned by prominent NASCAR figures. Efforts were made to bring in nontraditional NASCAR demographics, such as shorter races.

As part of the cover deal, Hendrick Motorsports will release free DLC packs after the game's release. Paid DLC packs will also be available from publisher 704Games.

The game was nominated for "Game, Franchise Racing" at the National Academy of Video Game Trade Reviewers Awards.