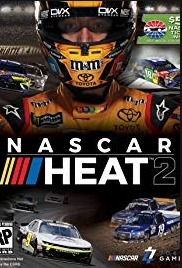 NASCAR Heat 2 is a racing video game by Monster Games and published by 704Games. It is the sequel to NASCAR Heat Evolution, and was released in North America on September 12, 2017 for the PlayStation 4, Xbox One and Microsoft Windows via Steam. Kyle Busch is featured on the cover. On June 11, 2017, it was confirmed that the NASCAR Camping World Truck Series and the NASCAR Xfinity Series will be featured in the game for the first time since EA Sports' 2008 release, NASCAR 09. Truck and Xfinity stand-alone tracks, including Eldora Speedway and Gateway Motorsports Park are featured. All three series are playable online, and in career mode the player can race his or her way up through the ranks to conquer the Monster Energy NASCAR Cup Series.

Career mode gives players the ability to start in the NASCAR Camping World Truck Series and work up towards the Monster Energy NASCAR Cup Series. The player can use their own car or use a driver on a team. In the beginning, users choose a driver from hot seat offers in the Truck Series and progress up the ranks to Cup. Users can also play a single-season championship simulation. Also included are online multiplayer, with races up to 40 players, or local split-screen multiplayer. Challenges featuring different tracks and drivers are also included in the game; all are voiced by Claire B. Lang.

The game was nominated for "Game, Franchise Racing" at the 17th Annual National Academy of Video Game Trade Reviewers Awards.