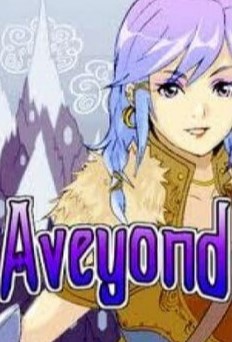 Aveyond is a role-playing video game series by Aveyond Studios (formerly Amaranth Games or Aveyond Kingdom). It is set in a fantasy medieval world in which players attempt to save the world from evil beings, with a number of side quests available. There are eight games thus far in the series: the first two full games, the four "chapter" releases of the third game, the full fourth game, and the free prequel, Ahriman's Prophecy. All the games in the series were made with RPG Maker XP; Amaranth Games was the first developer to popularize RPG Maker as a commercial tool in 2006. Several of the games were subsequently released for Linux and Mac, along with Windows.

Ahriman's Prophecy is a freeware role-playing video game released in 2004, and is the prequel of the series. Borrowing elements from Dragon Warrior and the earlier Final Fantasy games for its gameplay, it offers an experience similar to Japanese role-playing games. Unlike the other titles in the Aveyond series, Ahriman's Prophecy was not developed with RPG Maker XP and instead was created with RPG Maker 2003.

Ahriman's Prophecy starts as a young girl, Talia Maurva, is sent to be "named", a ritual set up by the people of her village to determine the profession of their adult life. Destiny changes for Talia, who, when looking into the seer's pool, sees a dark ceremony by the younger prince of a nearby kingdom, Candar. He and his dark priest were attempting to resurrect the dead warlock emperor, Ahriman, whose history in battle and warfare is legendary. The seer, sensing that Talia is different, sends her and her escort to a school of magic in the mainland city of Thais. Devin Perry, a friend of Talia, agrees to escort her to the mainland. Just after she completes her training three years later, Talia is summoned into a dream by her headmaster and a high priestess of the dreamland. They want her to slip across the continent to warn another order of priestesses that Ahriman is being resurrected, and the prophecy that surrounded his resurrection must be stopped before the thirteenth moon. Confused and disoriented, Talia nevertheless sets out on a journey that seems to pave the way to some peace in the world.

Ahriman's Prophecy was received well by the gaming community. Edward Zuk of Game Tunnel opined that "while Ahriman's Prophecy adds little that is new to the RPG genre, it's a pleasing mix of familiar elements." Download.com's editor's review stated "we found the game's twee period music a guilty pleasure that reminded us of our last visit to Ye Olde Renaissance Faire. And considering the game's free, you get a heck of a lot of adventuring for your money," awarding it a score of 4/5.

The sequel to Ahriman's Prophecy, this game features a different map from its prequel except for two islands. Expanding on the success of its predecessor, it offers a wealth of quests, characters and endings, and has been hailed as "funny, innovative and wildly imaginative".

Devin Perry and Alicia Pendragon from Ahriman's Prophecy eventually married, as well as Talia and an unnamed Sun Priest. Sixteen years prior to Aveyond 1: Rhen's Quest, the forces of the demon Ahriman destroyed and sunk most of the surrounding areas and isles around Thais. This was because Alicia Pendragon, queen of Thais, was foretold to give birth to a child who would defeat a great demon and save the city if she reached adulthood. It was the foretelling of this birth that Ahriman wanted Thais destroyed. Tailor Darzon, a young but trusted general of Thais, offered to take the child to a safe place and raise her where the demon would not find her. As Thais and the queen fell, Tailor fled the kingdom with the child and escaped across the ocean to the Western Isle. He almost did not make it, but Talia Maurva, the Druid of Dreams, saved their lives. Tailor settled in the small mountain village of Clearwater.

When the game starts, the protagonist, Rhen, gets teleported to a part of the Dreamland. A priestess, barely alive after the daeva Agas attacked her, asks Rhen to bring her back through the portal to Clearwater. Rhen's many questions were only partially answered by the stranger. The priestess, Talia, gives Rhen her ring and tells her to keep it close, and that it will protect her. Unfortunately, before she knew more, a case of mistaken identity causes Rhen, instead of the priestess, to be kidnapped by a slave trader and she was sold to a family residing on the Eastern Isle, an ocean away from Clearwater. This slave trader was employed by Ahriman as part of a scheme with the sun priest Dameon Maurva, Talia's son. A long and bitter family history prompts Dameon to forsake his duty as the Druid of Light to serve Ahriman, as his father, the previous Druid of Light, had. When they found out about the slave trader's mistake, Ahriman had the Dark Seer, Indra, read Rhen's part in the apocalypse. He learns then that Rhen is destined to destroy him, but he can't kill her or he will also be destroyed. So, he sends his minions to find her and turn her to his side, as Indra proclaimed. Meanwhile, Rhen is found to have a great aptitude for sword magic when she defends a child from the bullying of her master's son. She is released from slavery and sent to the eastern capital city to learn the art of sword singing. After she was raised to an apprentice however, she reunites with the priestess, who was actually Talia, who tells her that she must reunite all eight druids of the world so that an artifact of great importance could be revealed, and that it was her destiny to finally vanquish Ahriman once and for all. Along her journey, Rhen will discover secrets about her past and will have to make decisions that will determine the direction of her future as well as the fate of the world.

The game's soundtrack was written and recorded by Aaron Walz of Walz Musicpermanent dead link. The score features many recorded symphonic instruments, a rare feature for an independent game. The soundtrack won Game Tunnel's Game of the Year: Sound award for 2006.