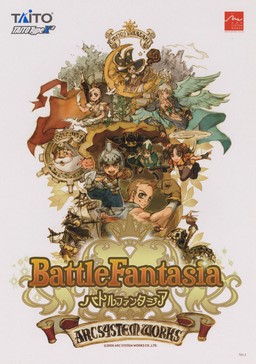 Battle Fantasia (バトルファンタジア Batoru Fantajia) is a fighting video game developed by Arc System Works. Originally released in Japanese arcades in April 2007, the title was ported to the Xbox 360 and PlayStation 3 home consoles in Japan in May 2008, with a North American Xbox 360-exclusive version released in English in September 2008 by Aksys Games. It was later released in the PAL region in 2009 for both systems by 505 Games (Europe) and Aksys Games (Australia). A Microsoft Windows version, ported in collaboration with DotEmu and distributed via Steam, was released on July 7, 2015 as Battle Fantasia: Revised Edition. The game's development was headed by Emiko Iwasaki, who had previously served as illustrator for the company's Guilty Gear series, and features three-dimensional character models restricted to a two-dimensional plane. Battle Fantasia retains a number of features of its predecessor including fast-paced gameplay, colorful anime-style graphics, and over-the-top effects, yet was designed to be a more basic representation of the fighting genre.

The game is notable for its stylistic departure from many fighting games, and is set in a fantasy world depicted as a storybook, and borrows many superficial elements from role-playing games including damage represented as numbers and a text-heavy story mode, which involves a number of heroes answering the call to battle to stop an evil force from once again attempting to destroy the world. Battle Fantasia met with relatively low sales in Japan and received mixed to average reviews from critics.

Battle Fantasia is a traditional versus fighting game where up to two players compete against each other in combat using a variety of characters each with their own special attacks and fighting styles. While the game uses three-dimensional graphics for characters, they are restricted to a two-dimensional battle area that only allows them to move back and forth or up into the air. Players face each other in best-of-three round battles that involve the use of normal attacks, throws, and special moves that often involve combinations of button presses and directional input, which can be strung together in long combo strings.

The game features four main attack buttons - two punches and two kicks - as well as a fifth "Gachi" (ガチ lit. "elegance" or "grace") button used to parry incoming attacks. If a player times a Gachi command just as an opponent's attack lands, it negates all damage and allows the player to counterattack in a brief time frame. The button can also be used to push an opponent back when combined with a direction, as well as allow the player to recover faster from a knock-down.

As players deal and receive damage, they add to their MP Gauge located at the bottom of the screen, which can be stocked to a maximum of three levels. Players can expend MP to activate "Heat Up" mode to increase their strength and add additional effects to their attacks, with specific enhancements differing with each character. The gauge also allows characters to unleash powerful super moves which cause heavy damage but require spending one gauge level to activate, and can be strung together with special moves with proper timing resulting in a Super Cancel combination. Matches are won either when a player depletes their opponent's health bar, or when the time limit of each round runs out, resulting in a win for the player with the most remaining vitality. The amount of health is different for each character, and is represented by numerical hit points under each health bar.

Battle Fantasia was developed by Arc System Works originally as a Japanese arcade game beginning in 2006. The company had previously been known for their work on the popular Guilty Gear fighting game series and was looking for ways to expand their market to a more general audience, and appointed character illustrator Emiko Iwasaki as the project's director, one of only a few women to rise to that position in the Japanese game industry. The game was the company's first title developed for the Taito Type X² arcade board hardware, and was the first game to use Taito's Vewlix arcade cabinet, which allowed the game to run in high-definition 720p resolutions. Although Iwasaki was given a large degree of freedom when making the game, she was encouraged by the company to retain many features from the Guilty Gear franchise in order to maintain their core audience, as well as being told that the game "needed" to use three-dimensional graphics in order to develop the company's 3D talent, as well as more efficiently utilize the Type X² hardware. Stylistically, the game was a departure from Arc System Works' earlier games, with Battle Fantasia's colorful fantasy art direction chosen due to the popularity of role-playing games in Japan, which was overseen by graphic designer Junya Motomura. Gameplay was also made simpler when compared to other games in the genre in an attempt to bring more people into fighting games, as well expand it to the female demographic. Early beta versions of Battle Fantasia began public location tests in select arcades across Japan in October 2006, with further tests conducted over the next few months until the game's official release in April 2007.

A home console version of Battle Fantasia was announced in a February 2008 issue of Japanese Weekly Famitsu magazine, and was confirmed for release for both the PlayStation 3 and Xbox 360 systems. The console releases would feature a number of new play modes, including a new, single-player story mode unique to each character, and online play over Sony's PlayStation Network and Microsoft's Xbox Live. In order to make the game more competitive, tweaks and balance changes were enacted to the game's roster, and exploits such as infinite combos were removed entirely. On May 1, a playable demo version of the game was released for the Japanese PlayStation Network, with a full commercial release for both consoles on May 29.