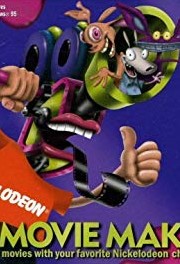 3D Movie Maker (commonly shortened to 3DMM) is a program created by Microsoft Kids in 1995. Using this program, users are able to place 3D characters into pre-made environments and to add actions, sound effects, music, text, speech and special effects. Movies are saved in the two 3D Movie formats: ".3mm" and ".vmm".

The program features two helper characters to guide users through the various features of the program; the character McZee (voiced by Michael Shapiro) provides help throughout the studio while his assistant Melanie provides other various tutorials. In Nickelodeon 3D Movie Maker, the user is guided by Stick Stickly.

Creating animation in 3D Movie Maker is a straightforward process, allowing younger users to create movies with ease. By default, 40 actors/actresses are available (each with 4 different costumes and a number of actions), as well as 20 different props. Twelve different scenes are available to the user, each containing several different camera angles. Many sample voice and MIDI music clips are included, but extra voices can be recorded using a microphone, and external wav and MIDI files can be imported.

The way movies are made in 3D Movie Maker is not like that of a video camera. A video camera works by recording images (frames) in quick succession. 3D Movie Maker stores the positions of the characters and objects for each frame. It moves at about 6 to 8 frames per second, which makes the movies choppier than expected. However, the finished movie can only be viewed inside 3D Movie Maker using the virtual auditorium or the studio, unless converted to a video file format with a third-party utility. The application's user interface is centered upon a theater building consisting of several rooms: the ticket booth, where the user is greeted by McZee and asked to play or create a movie; lobby and concession stand; theatre, for watching movies; and other rooms for tutorials and tools.