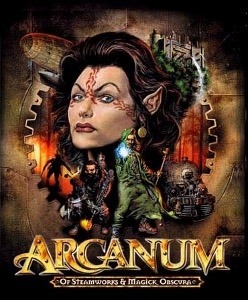 Arcanum: Of Steamworks and Magick Obscura is a 2001 role-playing video game developed by Troika Games and published by Sierra On-Line. It was released in North America and Europe in August 2001 for Microsoft Windows. Debuting at fourth position on NPD Intelect's best-seller list, it was Troika's first game and also their best-selling title with over 234,000 copies sold and with revenues of US$8.8 million.

The story takes place on the continent of Arcanum, which is a fantasy setting that is in the process of an industrial revolution. The story begins with the crash of the zeppelin IFS Zephyr, of which the protagonist is the only survivor, which leads them throughout the land in search of answers. The game employs an isometric perspective and features an open game world where the protagonist can travel unhindered.

Gameplay in Arcanum consists of traveling through the game world, visiting locations and interacting with the local inhabitants, typically in real-time. Occasionally, inhabitants will require the player's assistance in various tasks, which the player may choose to solve in order to acquire special items, experience points, or new followers. Many quests offer multiple solutions for the player, depending on their playing style, which may consist of combat, persuasion, thievery, or bribery. Ultimately, players will encounter hostile opponents (if such encounters are not avoided using stealth or diplomacy), in which case they and the player will engage in combat, which can be real-time or turn-based.

Arcanum begins with a cut scene of the IFS Zephyr, a luxury zeppelin, on her maiden voyage from Caladon to Tarant. Two monoplanes, piloted by Half-Ogre bandits, close in on the craft and commence attack runs, succeeding in shooting it down. An old gnome who is a passenger aboard the Zephyr is now in his death throes under charred debris and tells the player to bring a silver ring to "the boy," and promptly dies. Being the only survivor of the crash, the main character is proclaimed as "The Living One," a holy reincarnate, by the only witness to the crash, Virgil. The story follows the player's path as he searches for the origin of the ring. Over the course of the game, the player uncovers more about the history of the continent, the motivation of the assassins who are trying to kill him, and the identity of the one threatening to end all life in the land.

Arcanum is an example of a non-linear role-playing game. At various points throughout the game, players may take the story in different directions, sometimes permanently removing different paths of action. The game's central quest ultimately develops according to how players navigate its dichotomies, the most apparent being that of magic and technology. Many of the game's side quests allow for more than one solution depending on the player character's specializations and certain portions of the main quest can be solved more easily through dialogue than through combat. The game's magic/technology and good/evil alignments also influence what followers a character can attract throughout the game or how other NPCs will react to the player.

The game is also notable for being possible to complete in everything from a completely pacifist to a completely violent way. The player can, technically, kill every person he meets and still complete the game, even the very first companion he meets at the start of the game - if the person was an important NPC with plot information to divulge, they will carry that information with them in the form of a journal or the like. Likewise, the player is technically able to avoid combat altogether from start to finish, and can defeat even the final boss of the game without using violence (although this requires certain conditions to be fulfilled to be possible to do). Most players will of course fall somewhere between these two extremes, but the possibility is unusual for a role-playing game and also something that remains popular with fans.

(0) Comments on "Arcanum: Of Steamworks and Magick Obscura Full Version"