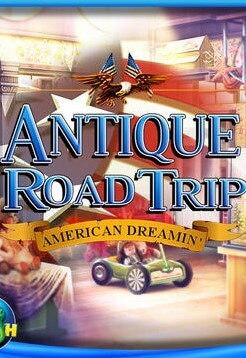 Antique Road Trip is a casual hidden object puzzle adventure game series developed by Boomzap Entertainment and published exclusively by Big Fish Games. In order to progress through each game, the player must solve puzzles and find hidden objects. It is available on PC, Mac, iPhone, iPad and Android platforms.

Main characters Grace and James Anderson are newlyweds travelling across America in search for hard-to-find antiques for their business. They visit cities such as Cheyenne, Memphis, Austin, Montana, Wisconsin and Louisiana to find various treasures. In the sequel, their newborn son, Colin, and a cute little puppy join them in their adventures.

These two antiques experts return for a third game not as main characters, but to help the player rebuild a local antique shop.

Antique Road Trip 2: Homecoming was released on Big Fish Games on April 19, 2011 as a sequel to Antique Road Trip USA. Similar to the prequel, it is a hidden object game with different mini-games. It received positive reviews from various game sites like iWin, Gamezebo and Big Fish Games where the customizable hint-giving puppy was pointed out as a "cute and welcome addition to the game." Android versions for Google Play and Amazon App Store were released in 2014.

Antique Road Trip: American Dreamin' is the third game in the franchise and was released on Big Fish Games on September 25, 2013. Like the first two games, the gameplay consists of hidden object scenes and mini-games. However, this is the first in the series, and of all the games developed by Boomzap, to be offered in the free-to-play format. It also includes a town-building feature. In an interview with Boomzap developers, it can be played as a stand-alone since the players create their own story. It also has a social gaming component wherein interaction with other real live players is also available.

Big Fish Games and Boomzap Entertainment also released an update that featured a Thanksgiving event starting November 15, 2013. Autumn-themed decorations and items were added to the game, including new quests and a pilgrim character.