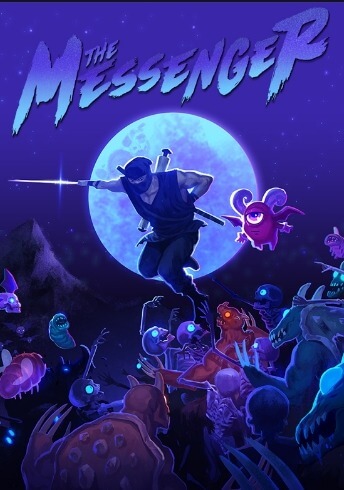 The Messenger is an action-platform video game developed by Sabotage Studio and published by Devolver Digital. It was released on Microsoft Windows and Nintendo Switch in August 2018 and the PlayStation 4 in March 2019.

The game begins with a village of ninjas being attacked by a Demon King. It is then that a supposed "Western Hero" appears and gives a scroll to one of the surviving ninjas, appointing him as "The Messenger" and telling him to deliver it to the top of a mountain. During his journey, the Messenger is aided by a mysterious blue-robed shopkeeper who provides him with upgrades and a demon named Quarble who helps to save him from death. After traveling through various areas and meeting a variety of foes turned friend, the Messenger arrives at the Tower of Time and encounters more blue-robed mages, who send him 500 years into the future to defeat the Demon King's general, Barma'thazël. Upon doing so, the Messenger loops around the world to the ninja village, where he, having reached the point of a cycle where he becomes the Western Hero himself, passes the scroll onto a new Messenger and takes up the role of a shopkeeper providing him with upgrades.

When this new hero ends up dying due to the previous shopkeepers negligence, however, the mages aim to break the cursed cycle, tasking the Messenger with collecting the notes of a mysterious music box in the Tower of Time. After the Messenger succeeds in this task, defeating the Demon King in the process, it is revealed that the music box is the prison of a man known as the Phantom who had become inflicted with a curse and created the time-traveling scroll in an attempt to stop it. This resulted in a 500-year-old mission passed down to several Messengers from various eras. Venturing inside the music box, the Messenger finds the Phantom, defeats the curse possessing him, and rescues him. The curse breaks loose, but the Messenger and the mages team up together to destroy it, putting an end to the curse.

The Messenger is a side-scrolling action-platformer, inspired by the classic Ninja Gaiden series. Players control a ninja known as "The Messenger" as he goes on a quest to deliver a scroll. The Messenger initially possesses a technique called "Cloudstepping", which allows him to perform an extra jump in mid-air after attacking an enemy, object, or projectile. As the game progresses, the Messenger gains new abilities such as climbing walls, gliding in the air, long-range shuriken attacks, and using a grappling hook to propel himself through obstacles and enemies. By collecting Time Shards earned by defeating enemies or hitting lamps, the player can purchase additional upgrades such as health bonuses or extra attack moves. If the player dies, however, a demon named Quarble will appear and automatically claim any Time Shards the player collects as payment for a short amount of time.

The game initially presents itself as a linear level-based adventure split across two eras; the past, which is presented with 8-bit graphics and audio, and the future, which uses 16-bit presentation. Later on, however, the game becomes a Metroidvania-style game, in which the player revisits past eras in any order and direction in order to find key items. In this section of the game, the player can use special warps to instantly move between the past and present, instantly changing the layout of each level and allowing them to access new and areas. Hidden in some areas are green medallions, earned by completing a challenging platforming section, with a bonus unlocked for collecting all 45.

Sabotage Studio is an indie development studio based in Quebec City founded by Thierry Boulanger and Martin Brouard in 2016. The Messenger was their first finished project, releasing on Microsoft Windows and Nintendo Switch on August 30, 2018, and PlayStation 4 on March 19, 2019.. The game's score was composed by Eric Brown, better known as Rainbowdragoneyes. Each track was made in both 8-bit NES and 16-bit Sega Genesis styles. The soundtrack release also featured bonus tracks by Keiji Yamagishi.

The game won several awards before its release. It won the Start-Up Numix in 2016. It also won Best Music and Best Gameplay during the Montreal Indie Game Festival of 2017. Jeremy Parish (Polygon) wrote a feature article on the website saying: "The Messenger stands apart from decades of Ninja Gaiden wannabes by presenting players with the tightest controls I've ever encountered in a game of this style". The game was presented to PAX South 2018 where several outlets praised the game as their best of show. At The Game Awards 2018, it was nominated for "Best Independent Game" and "Best Debut Indie Game", winning the latter. It was also nominated for "Best Debut" with Sabotage at the Game Developers Choice Awards, and for the G.A.N.G. / MAGFEST People's Choice Award at the 2019 G.A.N.G. Awards.