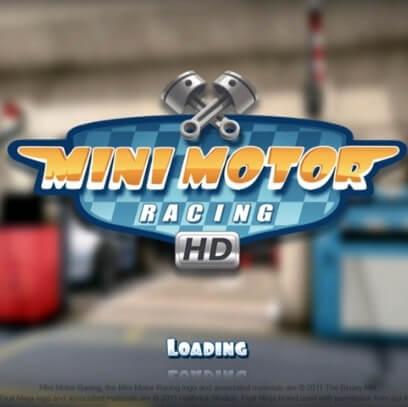 Mini Motor Racing is an Isometric Arcade Style Racing Game developed by The Binary Mill for the iOS and Android platforms. In May 2013, the game was also released for the Microsoft Windows platform, as Mini Motor Racing EVO. It was released on the iTunes App Store on December 8, 2011, and on the Google Play Network on May 11. The game features vehicle, race and environment physics, vehicle upgrades, day and night tracks, Career, Quick Race and Multiplayer modes along with Game Center leaderboards and achievements. Mini Motor Racing also uses Apple's iCloud to store and sync progress across iOS 5 devices.

Mini Motor racing is an arcade-style racer with strong emphasis on fun over realism. Rather than controlling acceleration and braking, the user must instead master powerslides and timely nitrous boosts to succeed. Cars regularly crash into the environment and each other, but there is no vehicle damage. The game uses a modified version of the Unity physics engine to model these collisions.

Finishing In Any Position in race nets the player cash rewards, which can be supplemented through in-game cash power ups. This Cash is used to Purchase Cars, or Upgrade Purchased/Unlocked Cars when playing career mode.

The game uses HD graphics, and while the game is set in an isometric view, the cars and tracks are full 3D models. Several control schemes are available for the user's selection, though physical controls such as those on the Sony Xperia Play are not supported.

A large update for Mini Motor Racing was released in early May 2012. The update added new content, including cars and tracks, but the most notable addition was the inclusion of online multiplayer for iDevices. Previously, the game supported only local area multiplayer.

Mini Motor Racing has been well received by critics, with high praise for its graphics, gameplay, and depth though there has been criticism over sometimes buggy terrain and collision physics.

The app has been selected as the featured app for both the iTunes App Store and the Google Play Network.