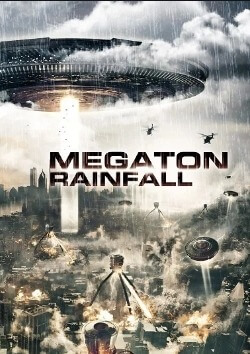 Megaton Rainfall is an action video game developed by Pentadimensional Games for PlayStation 4 and Microsoft Windows. It was released on October 17, 2017 for PlayStation 4 as a timed exclusive and later on November 17, 2017, for Microsoft Windows. It was released on the Nintendo Switch and Xbox One on August 9, 2018. It is also compatible with the Sony's virtual reality headset, PlayStation VR and was made compatible with the Oculus Rift and HTC Vive on August 9, 2018.

The plot revolves around an intergalactic superbeing tasked by its creator with saving planet Earth from an alien invasion.

Megaton Rainfall is an action game set in an open universe environment and played from a first person perspective. It can be played normally, and it can also be played using certain virtual reality headsets. The player must protect human cities from hordes of attacking aliens while avoiding collateral damage, and while the game's singular protagonist cannot die from alien attacks, entire cities can be destroyed. The player has the ability to fly at supersonic speed and even outside the atmosphere, and can reach mach 8 in 5 seconds. Earth is represented in full scale within the game, and although not every city is represented, it is possible to fly from the bottom of the Atlantic Ocean, outside of earth's atmosphere, and eventually to leave the Milky Way Galaxy. The player is able to travel to other planets as well to find cities and missions.

The game features fully destructible environments, and items such as buildings are procedurally generated and destructible, and the player can use several attacks to destroy environments such as surrounding buildings and enemy spaceships. The enemies have their weak spots marked by red lights. and according to the developer, he invented a new system for the realistic rendering of explosions. This allows for increased realism in the damage to buildings and other objects.

Megaton Rainfall was developed by Pentadimensional Games, a video game developer for virtual reality games. It is an indie studio formed by Alfonso del Cerro in Madrid, Spain in February 2015. The company both publishes and develops, and the game came out on October 26, 2017. The game was in development by one man, Alfonso del Cerro, for over five years. He had started the game in January 2012 in his spare time off from a Spanish games company.

Megaton Rainfall received "generally favorable" reviews from critics, according to review aggregator Metacritic, where it received a score of 76 out of 100. Gamespot gave it a score of 7 out of 10 and said much of it was "the stuff of childhood dreams", despite some spots that were "rough around the edges", and that "the exhilaration of flight, the feeling of power, and, perhaps most importantly, the sense of personal responsibility for the planet, has never been captured quite like this before." PlayStation Universe called it "one of the most stylish and enthralling games on PSVR."