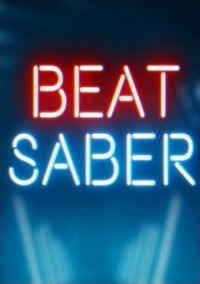 
Beat Saber is a virtual reality rhythm game developed and published by Beat Games. The game features the player slashing blocks representing musical beats with a pair of energy blades. The game had been in early access for the HTC Vive, Oculus Rift, Windows Mixed Reality on Microsoft Windows PCs since May 2018, and was fully released in May 2019. A first PlayStation VR version was released in November 2018. The game was also a launch title for the Oculus Quest, released in May 2019.

The game includes several songs with up to five levels of difficulty. In each song, the game presents the player with a stream of approaching blocks in sync with the song's beats and notes, arranged in a 4x3 grid as seen by the player. The player uses VR motion controllers to wield a pair of lightsabers that are used to slash the blocks. Each block is colored red or blue to indicate whether the red or blue saber should be used to slash it (red for left and blue for right), and may be marked with an arrow and rotated for one of eight possible directions to slash through the block. There are also blocks with dots instead of arrows, which players may hit in any direction. When a block is slashed by a saber, it is destroyed and a score is awarded, based on the length and angles of the swing and the accuracy of the cut. In addition there are occasionally mines that the player should not hit, and obstacles in the form of oncoming walls that the player's head should avoid.

Since its Early Acess stages, the game included a single player mode as well as a party mode which features a leaderboard generated based on names entered after each song is played. Additionally, the release version introduced a level editor.

The game was first released in early access on Microsoft Windows on May 1, 2018. The game was released on PlayStation 4 on November 20, 2018, and is also unofficially playable on Linux via Valve Corporation's modified distribution of Wine. An editor was announced for release in May 2018, which would allow for the creation of custom user songs, but it was postponed, and added in May 2019.

In March 2019, Beat Games released a paid downloadable content (DLC) music pack for the game, called "Monstercat Music Pack Vol. 1", that includes ten songs from record label Monstercat. "Crab Rave" was added as a free update on April Fools' day that year. On May 2, 2019, to celebrate the game's first anniversary, a prototype version created three years prior was released to the public as Beat Saber Origins. The game was fully released out of early access on PC on May 21, 2019.

The game sold over a million copies by March 2019.