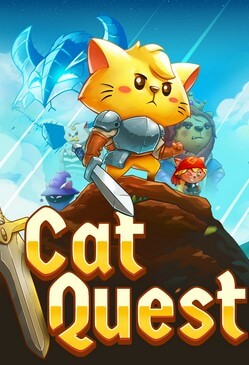 Cat Quest is an action role-playing video game developed by Singapore based team The Gentlebros and published by PQube. The game was released in 2017 and received generally positive reviews from professional critics.

Cat Quest is an action role-playing video game played from a top-down perspective. The game is set in an open world kingdom called Felingard. The player takes controls of an anthropomorphic cat who embarks on a quest to rescue his kidnapped sister. The game features real-time combat, dungeon crawling, and equipment progression.

Cat Quest was developed by The Gentlebros and published by PQube. Cat Quest was released for Windows and macOS on 8 August 2017, and 10 August 2017 for iOS. It was released for Android on 15 September 2017. The Nintendo Switch version was released on 10 November 2017. It was also released on the same day for PlayStation 4 in Europe, and on 14 November in North America. A physical release for the Nintendo Switch launched in September 2018 for Europe and North America.

Cat Quest was nominated and won the Excellence in Visual Art and Design in the 2nd SEA International Mobile Game Awards 2017. It was also nominated for "Mobile Game of the Year" at the 21st Annual D.I.C.E. Awards.