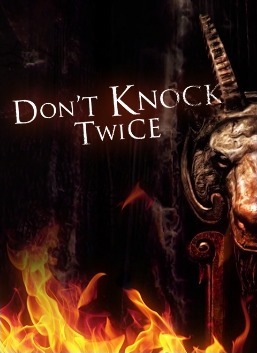 Don't Knock Twice is a first-person survival horror video game developed and published by Wales Interactive. The game is compatible with the PlayStation VR, HTC Vive and Oculus Rift virtual reality platforms. It was released worldwide in September 2017. A version for the Nintendo Switch was released in October 2017. Don't Knock Twice shares the same name as the film and is loosely based on the same story. The player takes the role of a guilt-ridden mother who must save her estranged daughter by uncovering the truth behind the urban tale of a vengeful, demonic witch.

The player is free to explore a grand manor house in search of their character's lost daughter. In VR, they can teleport to move around and interact with almost every item. The player has a mobile phone, which guides through the house and leaves hints to what challenges or puzzles lay ahead. While searching for their daughter, the player is being haunted by a demonic witch who is able to appear from anywhere at any time. There are some combat elements such as wielding an axe to chop down doors and creating flamethrowers by combining two items.

The game was announced by Wales Interactive on October 24, 2016 with a free playable demo, which was released on Steam for HTC Vive. A following update included support for Oculus Rift with Oculus Touch controls. On December 12, 2016, Wales Interactive campaigned for a place in the VRDB "2016 VR of the Year Awards" and went on to reaching the final round of nominations after achieving a mention in the Top 50 list.

The game was nominated for the "Creativity and Heritage Award" at The Independent Game Developers' Association Awards 2017, and for "Sound Design" at the 2018 Develop Awards.