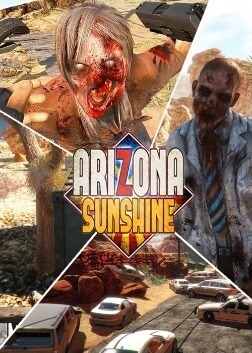 Arizona Sunshine requires motion controllers for play. The controllers are used to manipulate virtual firearms as well as to interact with the player's inventory and the environment. The player can carry a firearm in each hand, as well as two more in holstered positions, one on either side of the hips. The game supports room scale tracking. In the original version of the game traveling long distances required teleporting by pointing the controller and pressing the appropriate button but a January 2017 update to the game made artificial locomotion (free-roaming) available as an option.

The game includes a campaign in which the player explores environments and finds the tools needed to advance, and a horde mode in which players are confined to a small camp and try to survive against increasingly difficult waves of zombie attacks. Both the campaign and the horde mode can be played in single-player and multiplayer modes.

During the campaign the player constantly encounters small groups of zombies which are relatively easy to dispatch. But certain player actions, like picking up certain objects needed to advance the story, trigger a large zombie horde from which the player has to defend themselves by using their weapons and surroundings.

The unnamed player character awakes in a cave in an Arizona river valley. While exploring his surroundings and killing zombies he encounters, he finds a radio, turns it on and hears, among much static, something which sounds like a human voice. Searching for the source of the signal, the player encounters another radio with a stronger signal and comes to the conclusion that it is sent from a refinery which has been reinforced by the military. But when he reaches the refinery, he sees that it has been overrun by zombies. The player kills them all in a fit of rage and then has a breakdown. After staying the night in a safe room in the refinery, he continues the next morning, aimless and desperate. But after finding another radio, he notices that the signal is still there and is being sent from a town called Sunshine, Arizona. The player continues to the town and finally reaches the radio station, only to find out that no one in the station is alive and the signal is sent automatically. But when he screams his frustrations into the radio station microphone, someone answers him and tells him to wait outside, where he is rescued by a helicopter after withstanding a massive horde of zombies.