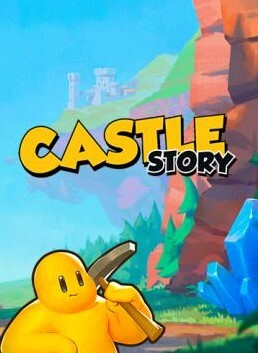 In Castle Story, the player is in control of workers called "Bricktrons" which can be directed to gather resources, build castles and fight enemies. The aim is to build a castle that can withstand attacks from creatures and other players. The game takes place on massive floating islands. The Unity game engine contains a physics engine that allows fully modeled destruction.

All game-modes can be played with other people.

Sandbox mode gives you an island to do as you please without threat of opposition.

Defend your home crystal for as long as possible against ever increasing hoards of enemy "Corruptrons."

Claim crystals and fight Corruptrons as you try to destroy their home crystal while defending your own.

Fight other players and try to retrieve periodically appearing crystals and take them to your home crystal.

An eleven-minute demonstration was released by Sauropod Studio on 24 December 2011. The video revealed the basic design of the game, featuring the yellow "bricktrons" building a castle and mining. The video's end had the developers exploding a castle in order to highlight the use of the Unity game engine.

A demo of Castle Story was shown off in real-time on 31 January 2012 at the International Game Developers Association Montréal DemoNight.

A five-minute timelapse video was released on 6 February 2012.

On July 27, 2012, Sauropod Studio began a Kickstarter project with the aim of raising money for the developers and gauging interest in the game. It reached its $80,000 target within five hours, and by the end of the funding period had raised over $700,000 - almost 9 times the goal for the project.

A prototype of the game was released on October 17, 2012, as stated in Sauropod Studio's Blogs. The prototype release was only available to people who pledged $25.00 or more to the kick starter program; currently the "Kickstarter" program has now ended and the prototype release is not for sale.

The prototype version was made available to "Beta-level" backers, or those who pledged at least $15.00 on the week of March 10, 2013. The developers stated that this decision was made to satisfy those who pledged to get the Beta considering meeting their original estimates for the release of the beta would be unrealistic.

On September 23, 2013, the game was made available for purchase through the digital distribution system Steam, through the early access program.

On August 17, 2017, the game was fully released and no longer in Early Access.