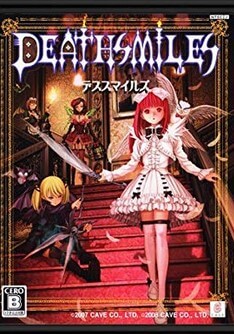 Deathsmiles (デススマイルズ Desusumairuzu) is a horizontal side scrolling shoot 'em up arcade game by Japanese developer Cave, released in late 2007. It is notable for its aesthetic style, featuring heavy occult and gothic influences. It is the second Cave shoot 'em up to be played using a horizontally-oriented monitor (the first being Progear, followed by Akai Katana). It was the first Cave shooter released in North America on a console, and the first one in Europe. Cave has also released it for iOS. A sequel, Deathsmiles II, was released to Japanese arcades on May 14, 2009.

Mega Black Label is a limited (150 copies total) arcade edition of the game released in Japan. It added Sakura as playable character, as well as the Crystal Shrine stage, and Level 999 difficulty level. There are other scoring changes.

Downloadable content for the Japanese market included the "Mega Black Label" (1200MSP) and a full voice download card for preorder and limited edition users. A "Mega Black Label Ver.1.1" was later made available as DLC.

Hori produced a controller for the Xbox 360 game that was an Amazon Japan exclusive.

On April 8, 2010, the Platinum Collection re-release came out in Japan, containing both the main game and the Mega Black Label downloadable content on the disc.

Aksys Games has released the game in North America on June 28, 2010. A Limited Edition was released that includes, along with the game, an exclusive Xbox 360 faceplate and a "Premium Arrange Album" soundtrack CD. As with the Japanese Platinum Collection re-release, the North American port integrates the Mega Black Label (MBL) content, providing a total of 6 game versions selectable from the front-end menu: Arcade, Ver 1.1, Xbox 360, MBL Ver 1.1, MBL Arcade, MBL Xbox 360. The additional playable character, Sakura, is available in the MBL versions.

Rising Star Games released the game in Europe on February 18, 2011 as "Deathsmiles: Deluxe Edition". This contained a soundtrack CD and a CD intended for use on the PC including desktop themes. Originally the soundtrack CD was misprinted and was released as a data CD including the music as .wav files. Rising Star sent out correct audio CD versions to customers for free. The European release contains Arcade, Ver 1.1, Xbox 360, MBL Ver 1.1, MBL Arcade, MBL Xbox 360 as per the North American release.