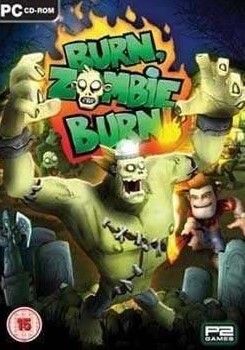 Burn, Zombie Burn! is a downloadable game for PlayStation 3 and Microsoft Windows developed by Doublesix. The PC version is published by P2 Games and launched via the Steam platform on August 12, 2010.

In Burn Zombie Burn! the player controls a character called Bruce, against a never ending horde of various zombies. The objective of the game is kill as many zombies as possible before he dies, whilst reaching certain score thresholds that unlock more of the game. The game is an arena based shooter. The core mechanic, as described in the game’s title, is about setting zombies on fire. In order to score high, the player has to set zombies on fire and each zombie on fire adds to their score multiplier. Burning zombies are also more dangerous as they run faster and deal more damage to the player if they get too close.

The game is split across six levels with varying layouts. Each level also has a unique event that is triggered by the “Big Red Button”. Attaining three consecutive weapon combos activates the button. Each event will normally help the player in some way but later in the game they can also harm him.

There are four game modes in the game and all are available on startup. However, unlocking levels within each mode has to be done by the player. There is also an optional Tutorial present.

On July 30, 2009, Doublesix released a Burn Zombie Burn themed space in the PlayStation 3's online community-based service, PlayStation Home. The space is called the "Burn Zombie Burn Lobby" in Asia and the "DoubleSix Lobby" in Europe and North America, and features a mini-game called The Maze. The Maze is a zombie infested maze that the users must make it through within two minutes. If they make it through successfully, they are rewarded a T-shirt for their Home avatar. The space also features a shop where users can buy additional Burn Zombie Burn themed T-shirts and outfits. There is also a video screen in the space advertising the game as well as a poster and seating for the users avatars. This space is available in the Asian, European, and North American versions of PlayStation Home.

Burn Zombie Burn! In Space was released on the PlayStation Network on June 7, 2010, in North America.