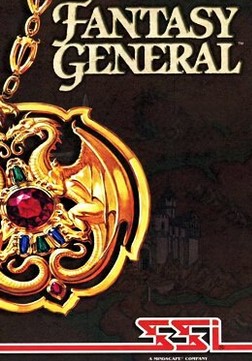 Fantasy General is a hex-based fantasy game published by Strategic Simulations in 1996. Its structure was taken from the computer wargame Panzer General with some modifications to the base system. It was the third in the Five Star General series. It allows gaming against other human players by email. It was published on GOG.com in May 2015 with support for Windows, macOS, and Linux after GOG Ltd acquired the copyright to the title.

A successor called Fantasy General 2 - Invasion has been announced by strategy publisher Slitherine and Developer Owned by Gravity in 2019.

Fantasy General is a turn-based game situated in a high fantasy world. The player can play either a single scenario against a computer or human opponent or a campaign. There are two sides, Good and Evil, each with unique units, though they share unit equivalents.

In campaign mode, the player selects one of four heroes and sets out to defeat the Shadowlord and his four generals, evil counterparts to the heroes. It concludes with the liberation of four continents and final defeat of the Shadowlord at the Fire Isle.

Gameplay is based on a traditional hex map, with a wide variety of units available. Fantasy General is an operational-level game. Unlike Panzer General, where units represent battalion-size groups, Fantasy General units approximate squads, with most units consisting of fifteen soldiers, though some (e.g. heroes, mechanical forces) represent single entities.

There are four unit categories: Mortal, Magical, Beast and Mechanical. Non-mortal units are usually stronger, but cannot be upgraded and will eventually become obsolete as the player researches new units.

In Campaign mode, the player allocates gold toward researching new grades of units. Units range in grade from 0 to 5, though not all categories of units have a unit available for every grade. Mechanical units, for example, are only available in grades 0, 1, 3, and 5.