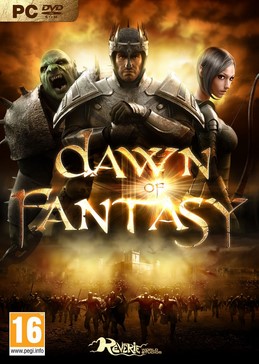 Dawn of Fantasy is a massively multiplayer online real-time strategy (MMORTS) game set in a medieval high fantasy setting. The game was developed by Canadian company Reverie World Studios for Microsoft Windows, an Xbox 360 version was initially planned but cancelled.

Dawn of Fantasy has a number of single-player game modes including Kingdom Wars, Lay Siege, Castle Defense and Custom Scenarios.

Kingdom Wars: This is a dynamic conquer-the-world game mode where players capture other cities (in any order they choose) through battle or diplomacy while fending off AI attacks. Players choose their Race (Humans, Elves or Orcs), choose their starting city (4 per race) and choose what campaign they wish to play:

Union War - Conquer the other cities of your race to unite your realm.

Realm War - Start with your race's realm allied to you and conquer the other realms.

Epic War - Start with one city and conquer the whole world.

Lay Siege: In this skirmish mode, players lay siege to one of the 12 major cities of the game world, allowing them to perfect their attack strategies and hone their skills

Castle Defense: In this skirmish mode, players must defend one of the 12 major cities of the game world, allowing them to perfect their defensive strategies and hone their skills

Custom Scenarios: Players are able to design their own custom maps with the Scenario Editor. The Scenario Editor is the same tool used by the developers to create all the town, city and quest scenarios in the game and uses the easy-to-learn Lua scripting language.

Development of Dawn of Fantasy began in 2001 by a group formed out of members of an Age of Empires II: The Age of Kings scenario editing community, forming a team led by Micah Hymer, John Lockwood and Kristo Vaher. Originally intended as a medieval strategy game, the project was reinvented as a fantasy game in late 2002. As an independent studio for the vast majority of DoF's development, Reverie World Studios (originally, Reverie Entertainment) obtained funding from the Canadian Government's Telefilm Grant.citation needed Dawn of Fantasy was signed by Lighthouse Interactive, which filed bankruptcy shortly after the deal was made. On September 1, 2012 game was submitted to Steam via Greenlight. On 30 November, Dawn of Fantasy become one of the first 50 titles to be voted onto Steam by the gaming public, when Valve announced the third set of games to receive the greenlight

The original audio score for Dawn of Fantasy was composed Joel Steudler and the game was made using the Mithrill game engine developed by John Lockwood.