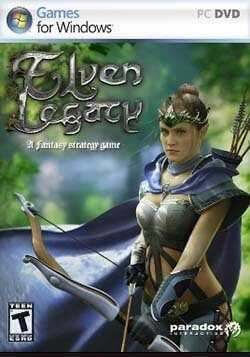 Elven Legacy is a turn-based strategy video game developed by 1C:Ino-Co and published by Paradox Interactive. Released in April 2009 for Microsoft Windows the game is a sequel to Fantasy Wars. On October 11, 2011, Virtual Programming released Elven Legacy Collection, which includes the original game and its three expansion packs, for Mac OS X.

The gameplay, like its predecessor, Fantasy Wars, is a turn-based strategy game. The player moves its units, each representing a single hero or a small soldier company, through hexagonal maps dictating where they go and when they attack. Once all units have exhausted both their move points and their (single) action for the turn the pc-controlled enemies (or the other human players, if online) start their movements and actions. As with Fantasy Wars, units are inspired by the typical fantasy races in a fantasy-medieval setting. Usually, a mission requires a certain list of objectives to fulfill (kill certain enemies, or reach a certain town on the map) with "prizes" awarded at the end of the mission based on how many turns the player needed to achieve them.

The game presents a time when five races existed: elves, orcs, humans, the undead, and dwarves. The races are in conflict for possession of one land where the orcs once have been driven away by the human race. A hundred years later, the orcs prepare for a war to recapture their motherland. At the same time, the other races declare war against the human race in an effort to capture the territory in which humans lived. The player can either choose to play as the elves or the orcs.

The game received generally positive reviews for the story-line and gameplay. Metacritic's aggregate score for the game is 71 (mixed or average reviews) based on 24 reviews. GameRankings' aggregate score of the title is 68.80% based on 20 reviews.

Elven Legacy: Siege was released on November 17, 2009. The expansion includes large-scale battles of large armies, and the capture of many-hexed cities. The expansion has the following new features: a campaign consisting of 19 missions with a nonlinear storyline; control of two armies; three new heroes; and bonus missions.

Elven Legacy: Magic was released on December 3, 2009. This expansion is the most recent in the series of games about the world of Illis. The expansion has the following new features: new heroes, unusual tactical possibilities, new spells and artifacts, and bonus missions.

On June 21, Virtual Programming announced the original Elven Legacy title was to be brought to the Mac OS X platform in late 2009. The publisher shipped the game, along with the three expansion packs, for Mac OS X on October 11, 2011.