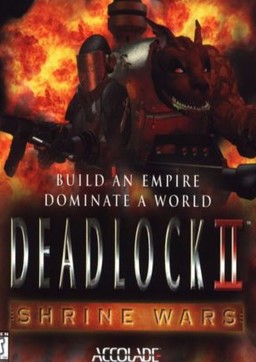 Deadlock II: Shrine Wars is a science fiction turn-based strategy video game developed by Cyberlore Studios and published by Accolade, released on February 28, 1998 as a sequel to Deadlock: Planetary Conquest. The game allows the player to play as the leader of an alien race who controls colonies on a planet's surface.

Deadlock II: Shrine Wars features turn-based gameplay that takes place on a planet map that ranges from around 1 to 9000 tiles, each presenting a region, or area of building. Players take control of each territory by colonizing it with a "Colonizer" vehicle or taking it from another player through military conquest. Each territory consists of a six-by-six grid in which buildings can be placed. Like most strategy games, Deadlock II: Shrine Wars uses natural resources and credits to pay for new units and buildings. Colonists are assigned to buildings to generate resources and research. These new units and buildings are able to be created after their prerequisite technologies are researched.

As a sequel, the most notable features in Deadlock II are

Deadlock II: Shrine Wars features seven alien races each with their own strengths and weaknesses. The racial abilities are not as pronounced as they are in other strategy games such as Warcraft but can still greatly affect the way in which each race is played.

The ChCh-t are a race of insect-beings resembling mantises and scorpions. They have a hive mind with most activity revolving around the queen of each individual hive. The ChCh-t excel in construction so units and buildings are produced faster. The ChCh-t produce colonists faster and their housing units hold twice as many colonists. They suffer from slow researchers and weak military units but all military units are faster. ChCh-t scouts can steal resources from enemy colonies.