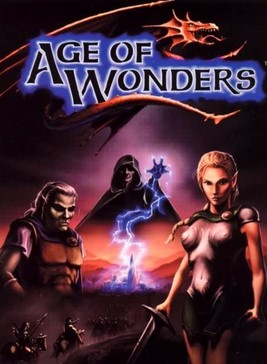 Age of Wonders is a turn-based strategy video game often likened to Master of Magic. Originally titled World of Wonders, the game incorporated several role-playing video game elements that were dropped when simultaneous turns were implemented. The game was co-developed by Triumph Studios and Epic MegaGames, Dutch and American game developers respectively, and published by Gathering of Developers in 1999; it was re-released in 2010 on GOG.com and Steam.

The game has a single-player campaign, playable from two sides (more campaigns have been made by the community since release), and many maps, both included and user-created that can be played in Hotseat mode, over a LAN, on the Internet, or by email (PBEM). Up to 12 players can participate in a single game, depending on the map.

Players have an isometric view of the map, which consists of hexagonal tiles, and can have up to three layers (surface, caverns, and depths). Units are arranged into groups (also known as parties or stacks) of up to eight units; a single such group occupies one tile. Cities occupy between one and four tiles, and other structures generally occupy a single tile.

Each player leads a certain race. There are 12 races available in the game, though not all of them may be present on every map, and of those which are, not all may be playable. List of races includes traditional fantasy Elves, Lizardmen, Humans, Goblins, Dark Elves, Undead, Orcs, Dwarves and Halflings, as well as several unique ones such as Frostlings, Azracs, and Highmen. Races, as well as units not belonging to any specific race, such as dragons and giants, have a certain alignment, which can be good, neutral, or evil. According to their alignment and certain other factors, cities and independent units of one race can be friendly or hostile towards another race. This can manifest itself in different ways; for example, an orc city is not likely to surrender to the elves, and if conquered, may revolt unless there is a strong military presence in it to oppress the population. Units of hostile races forced to fight alongside each other in a single group will have lower morale, and are more likely to desert. Race relations can be improved by acts of goodwill towards other races, such as upgrading their cities, or hampered by razing, looting, or migrating cities belonging to that race. Diplomacy can also affect this and even an alliance with one race might affect the relation of another race. There are also several spells which have a global effect on race relations.

There are two resources, gold and mana. Gold is used to build units, buy heroes, cities and spells (in Wizard Towers), upgrade cities. Mana is used to cast and research spells and use altars.

Units within the game have a limited number of movement points, which are replenished at the beginning of each turn. Two turn systems are used - sequential (or "classic"), where players take their turns in order, or simultaneous, where all players can move units at once. In practice, actions in the latter system are added and executed via a queue. Simultaneous turns are only available in single player and live multiplayer games; PBEM and hotseat games, and all combat, use the sequential turn system.

Units can be built in cities, which can be further upgraded to produce more advanced units. Also, wandering independent (not belonging to any player) groups of units can be hired, if they are well-disposed towards the player. Units may have different strength, reflected by their level, which can vary from 1 to 4. Units under player control require a certain amount of gold every turn as an upkeep, the size of which depends upon the level of the unit. Summoned units use mana for upkeep instead of gold.

Units have several parameters, namely attack, defence, damage, resistance, movement points and hit points. They may also have special abilities such as Archery, Fearless or Swimming.

Units earn experience for killing other units. The amount of experience earned depends on the number of enemy units killed as well as their level - the level of the enemy killed is the amount of experience gained. Upon earning a certain amount of experience, the unit gets a silver medal, and later on a gold one. Higher level units require more experience to earn medals. Units with medals also get slight increases to their basic parameters, or otherwise improve their combat performance.

A special type of unit, a hero, can only be hired when they appear at random at one of the player's cities. Heroes earn experience points just like all other units do; however, instead of getting medals for it, they gain levels to a maximum of level 30. Upon reaching the next level, they get a number of skill points, which a player can then spend to improve their parameters and teach them special abilities. This point system is similar to that used in many role-playing video games. In addition to that, heroes are the only units in the game which can learn the Spell Casting special ability, allowing them to cast spells. The Spell-Casting special ability can be upgraded from level I to level V. Each level provides more mana income/research points and also improves the channeling points allowing the hero to cast more/better spells each turn. Some spells require many turns to cast even with level V Spell-Casting. Heroes can not work together to cast one spell - each must cast it individually. Unlike common units, heroes can be brought from dead by magical means, although such experience will greatly decrease their morale.