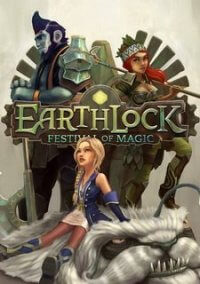 Earthlock: Festival of Magic is a role-playing video game developed and published by the Norwegian company Snowcastle Games for Microsoft Windows, OS X, Linux, PlayStation 4, Xbox One, and Wii U. The Xbox One version was launched on September 1, 2016 worldwide, with the PlayStation 4 and Wii U versions to follow suit at a later date.

The PC/Mac version, initially planned for release at the same time as the Xbox One release, was postponed to September 27, 2016. The game is planned to be the first volume of an Earthlock trilogy. A version for the Nintendo Switch was released on March 8, 2018.

The game plays as a non-linear role-playing video game with turn based battles. In combat, characters fight in pairs - a "warrior" and a "protector". The warrior uses consumable items such as ammunition, while the protector can perform spells like healing and shields. When the characters are damaged by enemies, they accumulate support points, which can be used to activate other moves. Pairing different combinations of characters unlocks different moves and tactics, greatly affecting the flow of battle.

The game's story takes place in the world of Umbra, where a cataclysmic event occurs that stops the planet from spinning. This leaves part of the world scorched by constant sunlight, part of it perpetually cold due to lack of sunlight, and a patch of livable land in between. The incident ends up burying much of the past advanced civilization, but humanity survives and society begins anew in the habitable part of the planet. The story follows the adventurer Amon, who, among his usual activities of scavenging ruins, gets entangled in a much larger conflict with the ruling Suvian Empire.

The game is inspired by early Square Japanese role-playing games, though Snowcastle wanted to subvert common genre character stereotypes. Development for the game started as early as 2011, with a pre-alpha build trailer being released in May 2013. The game was originally just known by its subtitle, Festival of Magic.

In November 2013, the game was placed on crowdfunding platform Kickstarter with the aim of securing $250,000 in funding. However, Snowcastle later pulled from the platform, due to it getting lost in the crowd during the holiday season. A fresh Kickstarter campaign was launched in March 2014 with a lowered goal of $150,000. This second campaign was successful, raising $178,000 in April 2014. The game's plot will be written by comic book writer Magnus Aspli.

An early concept demo was released in March 2014 for the Windows, OS X and Linux platforms.

Snowcastle Games partnered with Cross Function to release the game in Japan. Despite waning interest in the Wii U in 2016 after the announcement of the Nintendo Switch, Snowcastle Games upheld their promise of a Wii U version, with an unnamed third-party handling porting duties. The Wii U version was ultimately released in September 2017 as a digital-only title.