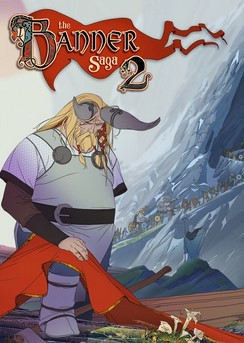 The Banner Saga 2 is a tactical role-playing video game developed by Stoic Studio and published by Versus Evil. It is the sequel to The Banner Saga, and the second part of a trilogy of games.

The Banner Saga 2 builds on The Banner Saga's turn-based combat, adding depth with the introduction of new units, new talents, new enemies, interactive objects, and new objectives. It also introduces The Horseborn, a centaur-like race. Several heroes from the original return as playable characters, and many of the choices made in the first game have a direct impact in the second.

In a 2015 interview with Rock Paper Shotgun, Stoic's writer Drew McGee noted that combat in the first game was often criticized as slow and lacking in diversity. The development team therefore prioritized creating new enemies and enemy types for players to face, giving them new abilities and buffs while also adding more win scenarios and variations in combat. The range and scope of choices available to the players - both in combat and in the overall narrative - has also been expanded.

The Banner Saga 2 is developed by three-man indie development team Stoic. The game was announced at The Game Awards on December 5, 2014. Initially, the game was scheduled to be released for the Microsoft Windows, PlayStation 4 and Xbox One in 2015. However it was later delayed into 2016. Windows and OS X versions were released on April 19, 2016, and PlayStation 4 and Xbox One in July 2016.