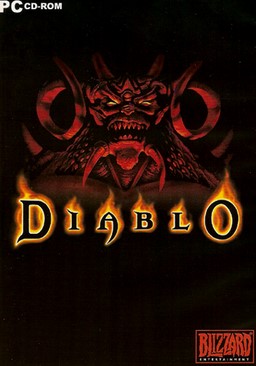 Diablo is an action role-playing hack and slash video game developed by Blizzard North and released by Blizzard Entertainment on December 31, 1996.

Set in the fictional Kingdom of Khanduras in the mortal realm, Diablo makes the player take control of a lone hero battling to rid the world of Diablo, the Lord of Terror. Beneath the fictional town of Tristram, the player journeys through sixteen randomly generated dungeon levels, ultimately entering Hell itself in order to face Diablo.

An expansion pack entitled Diablo: Hellfire was released in 1997 by Sierra Entertainment. In 1998, Electronic Arts released Diablo for the Sony PlayStation. This version, developed by Climax Studios, featured direct control of the main character's direction, as opposed to point-and-click movement, using the PlayStation controller. A Sega Saturn version was considered by Electronic Arts but never released. The game's level of success led to two sequels: Diablo II in 2000 and Diablo III in 2012. Five years later, to celebrate Diablo's 20th anniversary, "The Darkening of Tristram" quest was added to Diablo III in early 2017.

Diablo is an action role-playing hack and slash video game. The player moves and interacts with the environment primarily by way of a mouse. Other actions, such as casting a spell, are performed in response to keyboard inputs. The player can acquire items, learn spells, defeat enemies, and interact with non-player characters (NPC)s throughout the game.

The dungeon levels are randomly generated, although they follow parameters according to their type; for instance the catacombs tend to have long corridors and closed rooms, while the caves are more non-linear. The players are assigned a random number of quests from several tiers; these quests are optional but help to level up the character and/or reveal more of the backstory. The final two quests, however, are mandatory in order to finish the game.

Diablo has three character classes: the Warrior, the Rogue, and the Sorcerer. Each class has a different level of assigned attributes along with a unique skill. Each class is capable of using almost all of the same items and spells, in contrast to later titles in the Diablo series which have class-specific items and spells. However, the limitations in the attributes for each class reward play that utilizes them efficiently; for instance the Warrior's low maximum level of Magic prevents him from learning the higher levels of powerful spells like the Sorcerer, instead the Warrior is best suited to melee with a faster weapon swing plus a "critical strike" for bonus damage.

Many items have attribute minimums to be used effectively. White-colored items are normal items, blue-colored items are magic items and gold-colored items are unique items. Any items that are not white in color must be identified to make use of their magical effects, however, characters can use unidentified items as they would the base item. Items wear down through use and only have a certain amount of durability. When an item's durability is zero, it is destroyed. Players can return to the town and pay a fee to an NPC, Griswold the Blacksmith, to have the items restored, while the Warrior can repair objects in his possession at the cost of overall durability.

Bows are the ranged weapon of the game, best used by rogues. Staves, while capable of physical attacks, are mainly used for the spell charges that they contain, as casting from a staff does not require the player to learn the spell or use mana. A staff's spell can only be cast a certain number of times before it requires a recharge. Swords are typically one-handed (though two-handed varieties also exist), while axes are all two-handed. Maces and clubs add a 50% damage bonus against the undead. Shields, when paired with single-handed weapons, allow attacks to be blocked. There are three classifications of armor: light, medium and heavy. Characters are also allowed to wear a helmet, two rings, and one amulet.

Books contain spell formulas. Spell books cannot be used more than once, but multiple books of the same spell will increase the spell level, up to a maximum of 15. Scrolls allow use of both spells not yet learned, and spells not available in book form. They vanish after one use. Many potions are available for use, including health and mana restoration, and elixirs that increase statistics.