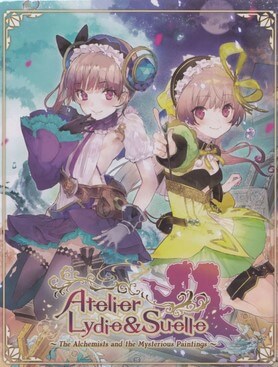 Atelier Lydie & Suelle: The Alchemists and the Mysterious Paintingsa is a role-playing video game developed by Gust Co. Ltd., and originally released in Japan for the PlayStation Vita and PlayStation 4 in December 2017. It was released worldwide in March 2018 for the PlayStation 4, Nintendo Switch and Microsoft Windows. It is the nineteenth main entry in the Atelier series celebrating the 20 years of the franchise. It is also the third and final game of the Mysterious storyline.

Set eight years after Atelier Sophie and four years after Atelier Firis, the story follows the alchemist twins - the reserved but caring Lydie Marlen, and the eccentric, carefree Suelle Marlen who work alongside their father at the family atelier. But due to his inexperience in alchemy they rarely see any customers. While working to hone their skills, the duo uncovers a mysterious-looking painting, and as they reach out to investigate, the girls are drawn inside a world bountiful with rare materials perfect for alchemy. Thus begins the twin's adventure leading them to their joint goal to run the best atelier in the country. But again, their inexperience and lack of customers makes this a difficult goal to attain. This entry into the series follows Lydie and Suelle go through everyday life at the atelier, but it also mixes everyday life with extraordinary experiences and adventures. To achieve this, "paintings" were chosen to be the theme of this entry into the series.

The player controls Lydie and Suelle Marlen as they travel the world, fight monsters, and take on quests to increase their atelier's reputation. The player can receive "quests" from various NPCs around the game's world, and can unlock various secrets and abilities regarding the mysterious paintings they explore. Combat is turn based, and up to six characters can fight at once, divided into three pairs, each pair composed of an attacker and a supporter. The attacker can always act once their turn begins, but supporters can only act according to certain actions performed by the attacker. The attacker and supporter can switch places during the battle and certain pairs have special combination attacks that can be unleashed with powerful results.  The player must find and purchase various magical reagents and process them into potions, crystals, and food items for the local townspeople. The game also features puzzle-based mini games that allow you to provide for the townspeople.

(0) Comments on "Atelier Lydie & Suelle: The Alchemists and the Mysterious Paintings Full Version"