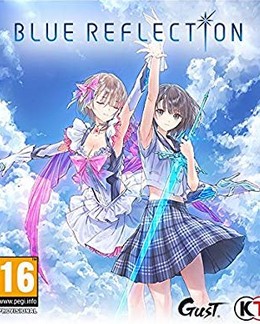 Blue Reflectiona is a role-playing video game developed by Gust Co. Ltd. It was published by Koei Tecmo in March 2017 in Japan for the PlayStation 4 and PlayStation Vita, and was released in September 2017 in North America and Europe for the PlayStation 4 and Microsoft Windows. The player takes the role of Hinako Shirai, a ballet dancer who due to a knee injury no longer can dance, but who is given magical power allowing her to fight and move freely. The game follows a day cycle, which sees Hinako attend school and spend time with classmates, and visit another world where she fights monsters in a turn-based battle system. By becoming close friends with her classmates, Hinako can use support abilities from them in battle.

The game is the final game in Gust's "Beautiful Girls Festival" project, which also includes Atelier Firis and Nights of Azure 2. It was produced by Junzo Hosoi, organized by Keiichi Sigsawa, Yūsaku Igarashi, and Kouji Natsumi, and supervised by Mel Kishida, who also designed the characters. It is intended to be a portrayal of youth for women, focusing on the concepts of interaction between women and personal growth through sharing experiences with people.

Blue Reflection is a role-playing game, which follows a day cycle: in the morning, the player character goes to school, and sometimes meets other students on the way. Scenes occur during school, some of which involve questions from the player character's classmates, which affect their relationship to the player character depending on the player's answers; close friendships with characters enables additional support benefits during battles, and affects their attitudes towards the player during story sequences. The player can also interact with characters by messaging them through an in-game mobile app, which also allows the player to view character profiles and play minigames. After school, the player is allowed to move around freely; they can choose between various activities, including spending time with the classmates and creating items. After the player is done for the day, their character returns home, and the day ends with her going to sleep.

The player can also try to solve classmates' problems during their free time. The cause for their problems sometimes reside outside the real world, in the Other World; by visiting it, the player can seek out emotion fragments, which cause defects in the real world. After finding the fragments and overcoming challenges in the Other World, the player learns about the thoughts of the character they're helping, is returned to the real world, and receives reward items and fragments. Different missions include different rewards; some give the player growth points, which the player can invest in their characters' attack, defense, support, or technic stats, making them stronger and teaching them new skills. The fragments the player acquires can be equipped to the characters' skills, giving the skills additional effects. In addition to the rewards, some missions give the player evaluation points; the story progresses when the player has acquired enough of them.

While exploring the Other World, the player sometimes encounters monsters, leading to a battle, wherein the three characters in the player's party fight through a turn-based system. The turn order is displayed through character icons that move across a bar, with characters at the center of the bar allowed to perform an action; by preemptively attacking monsters in the Other World, the player's party can start the battle at an advantage. Actions are chosen through a menu, with commands such as "attack" and "support". If certain requirements are met, the player can perform cooperative moves, where the powers of the characters in their party are linked, resulting in a much more effective attack than regular attacks. During each turn, the player can choose to charge up their ether; they can consume this when recovering or guarding to improve those actions' effects. Unlike other commands, these two are done in real-time before the player characters or the enemies perform an action, by pressing a button at the right time. In the real world, the player sometimes encounters powerful enemies called "Pure Breeds", which are capable of defeating a party member in one blow. During these battles, the player can receive support from the player character's schoolmates, who all have different support abilities; to do this, the player needs to choose up to four support characters per party member while outside combat. The player's "guard" action also changes during these battles, to "reflect", through which the player can reflect the Pure Breeds' attacks against themselves, dealing a large amount of damage.