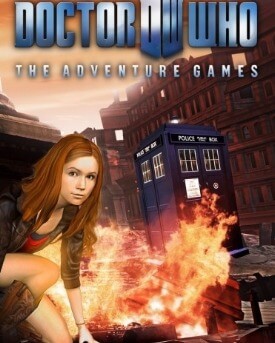 Download Doctor Who: The Adventure Games Free for PC Torrent

Doctor Who: The Adventure Games is a series of episodic third-person adventure games, based on the BBC TV series Doctor Who and developed by Sumo Digital. Charles Cecil served as executive producer and worked with Sean Millard and Will Tarratt on the design.

Each episode was made available for free download to residents of the UK via the BBC's official Doctor Who website; a UK internet address is required to both download and install them, though several of the games subsequently were made available for international sale. The first one was released on 5 June 2010, the second one on 26 June 2010, the third on 27 August 2010, the fourth on 22 December 2010 and the fifth on 31 October 2011. In February 2012, the BBC announced they had shelved the games in favour of worldwide console games such as Doctor Who: The Eternity Clock. In June of 2017, the game no longer became available to purchase on the Steam platform after the developer's license with the BBC expired.

City of the Daleks

The Doctor and Amy arrive in Trafalgar Square, London in 1963 to find the city in ruins and under the control of the Daleks. Following a woman, Sylvia, into the London Underground they learn that she is the only human survivor after the Daleks invaded – appearing through a 'split' in the sky. Amy, Sylvia and the Doctor are pursued by the Daleks. Sylvia is killed but the Doctor and Amy escape. The Doctor deduces that the Daleks have gained the power to alter history and, returning to the TARDIS with Amy, traces the source of the invasion to Skaro, the Daleks' home planet.

The TARDIS lands in Kaalann, the Dalek capital city, which has been rebuilt since the Doctor last saw it. Amy begins to fade, since the destruction of humanity in 1963 means that she was never born. The Doctor uses several Dalek components to create a "Chronon Blocker", which slows the process. The Doctor and Amy observe the Dalek Council Chamber. They see the Dalek Emperor, as well as a device which the Doctor believes to be the technology that allows the Daleks to manipulate history.

The Doctor and Amy are captured by Daleks and taken before the Emperor. The Emperor explains that the Daleks will become the new Time Lords with control over the Time Vortex, through the use of the "Eye of Time", a powerful tool previously kept on Gallifrey. The Doctor escapes with Amy by leaping into the Eye which transports them back in time to an earlier ruined Kaalann which is infested with Varga plants just prior to the arrival of the Daleks with the Eye.

The Doctor sends Amy to find components that he can use to create a device that will blind the Daleks. Despite beginning to fade once more, Amy finds the parts and the Doctor constructs the device. In the Council Chamber, the Daleks, led by the white Supreme Dalek, are preparing to use the Eye to launch an attack on Earth in 1963. Amy, still fading, activates the blinding device affecting the Daleks. This allows the Doctor to free the Eye from its restraints and to flee the room with Amy. The Eye crashes down and explodes and the Doctor and Amy find themselves back at the TARDIS, but with Kaalann still in ruins. Amy is no longer fading out of existence. Using the TARDIS scanner, they see that the original 1963 timeline has been restored and that Sylvia is alive.

Blood of the Cybermen

A number of flashbacks show an excavation of an arctic base. A worker at the base called Chisholm flees from the base on a Snowmobile where he finds a Cyberman arm. Chisholm falls off a cliff and gets badly hurt. The Doctor receives an SOS call which he responds to, and landing where Chisholm fell. The Doctor and Amy rescue Chisholm and they use the TARDIS to go back to the base where Chisholm came from.

They get out the TARDIS where Chisholm is attacked by a Cybermat after which he runs away and hides. The Doctor goes to the base entrance where he encounters a Cyberslave. After Amy kills the Cyberslave they enter the base. The head of the operation, Professor Meadows (voiced by Sarah Douglas), tells them that all of her crew have been turned into Cyberslaves. The Doctor starts on a serum to reverse the effects of the Cyberman conversion. To reach the communications room they have to get past Cybermats and then a Cyberslave which tries to kill Amy. The Doctor and Amy hear over the radio that a team is coming to the base, however they can't be warned until the radio is repaired. The Doctor has developed a cure which they give to the part changed Chisholm. Chisholm shows them a lift in which they go down underground.

Trying to get to the control room the Doctor and Amy have to get around Cyberslaves. However, Amy is kidnapped by two Cyberslaves. The Doctor reaches the control room where he finds Professor Meadows is now a Cyberslave. She forces the Doctor to revive the Cybermen from stasis to save Amy. The Doctor saves Amy but he needs to stop the Cybermen. The intervention of Chisholm allows him to do this and they escape from underground before an explosion destroys everything. The Doctor and Amy leave Chisholm behind so he can answer any questions that UNIT might have. After that the Cybermen are seen frozen on ice.

The Doctor and Amy are inside the TARDIS, discussing where they should go next for a more peaceful outing, and the Doctor mentions that his holidays in Brighton and Paris did not turn out well (alluding to The Leisure Hive and City of Death respectively). However, the TARDIS suddenly enters a 'space riptide', and the Doctor is launched through the doors and out into space.

After the TARDIS steadies itself, Amy looks outside and sees the Doctor hovering, still conscious and surrounded by a number of strange blue worms, a short distance away. Through sign language, he manages to tell Amy that he is slowly suffocating, and she can save him by operating the TARDIS. Amy follows his directions and recovers the Doctor by using a makeshift tractor beam to draw him back into the TARDIS. The blue worms, known as 'Chronomites', are somewhat harmless parasites, although they can make you 'very itchy'.

Just as they begin to celebrate their victory, the TARDIS enters another riptide, and Amy disappears. Amy is now in the Doctor's future with a strange glowing sphere that she had accidentally released from its prison in the TARDIS. The Doctor brings himself and Amy back into the same time and deals with the creature, the "Entity", by releasing it into the vortex so that it can feed on the Chronomites while the Chronomites feed on it, the two keeping each other contained.

The Doctor plans to take Amy to 23rd century London just after a 'Great Flood', but finds that the underwater city is being prowled by a gigantic shark-like creature.

All games from the serie "Doctor Who"

View all games "Doctor Who"

(0) Comments on "Doctor Who: The Adventure Games Full Version"