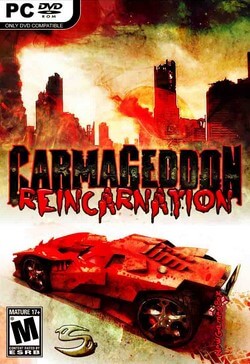 Carmageddon: Reincarnation is a vehicular combat game, the fourth in the Carmageddon series. The game was developed by Stainless Games.

A financial report in 2003 revealed that Carmageddon 4 was in development. The developers were identified as Visual Sciences, who were also working on Carmageddon TV for the Gizmondo handheld console. The publishers were confirmed as Take-Two Interactive's newly formed subsidiary 2K Games (although the same article named the developers as original Carmageddon publishers SCi). Very little information was released about the game until late 2005, when recently merged publishers SCi and Eidos Interactive put development on hold for unspecified reasons. The game was subsequently assumed to have been canned, as no new information or press releases surfaced since that time, and Eidos moved on to focus on other projects.

In 2011, after buying back the rights to the series from then-current copyright holders Square Enix Europe, original Carmageddon developers Stainless Games revealed that a new Carmageddon game was in early pre-production stages. Since then numerous concept artworks and early in-game test screens have been released on the official site. The game is planned to be released through digital distribution.

On 8 May 2012 it was announced on the official website that Carmageddon: Reincarnation would be funded through Kickstarter, with a promised release in February 2013 via Steam. Stainless Games aimed to raise over $400,000 (£250,000) via Kickstarter in order to produce the game. People who pledged more than $1000 for the project would have the chance to be featured in the game. The $400,000 target was reached in 10 days, when it was announced that if the project raised $600,000 then Mac and Linux versions would also be produced. This new target was met by the campaign's end on 6 June 2012 - with a total of $625,143 raised.

Stainless sent emails to Kickstarter backers with updates on development, with the same content later posted publicly on the official Carmageddon website. On 20 December 2012, Stainless Games mailed their backers with news that they were expanding their scope on the game, but it would take "the best part of 2013" to accommodate these changes, pushing back the release date.

Carmageddon: Max Damage is an updated version of Carmageddon: Reincarnation, which was released on PlayStation 4 and Xbox One on 8 July 2016. The game is available both as digital download and as a physical disc, with the disc version being distributed by Sold Out Sales & Marketing. It was later released for Microsoft Windows on 28 October 2016.

All games from the serie "Carmageddon"