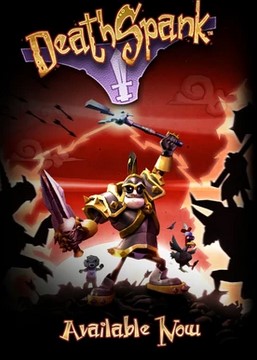 DeathSpank, also known as DeathSpank: Orphans of Justice, is a comedy action role-playing game created by game designers Ron Gilbert and Clayton Kauzlaric. It was developed by Hothead Games and published by Electronic Arts. The game was released on July 13, 2010 on the PlayStation 3 via the PlayStation Network and on July 14, 2010 on the Xbox 360 via Xbox Live Arcade. The Microsoft Windows and Mac OS X versions were released October 26, 2010 and December 14, 2010 respectively, via Steam.

DeathSpank follows the titular character DeathSpank in his quest to find an item known as The Artifact. The game was originally supposed to be the first of a two-part series. The second half of the series, entitled DeathSpank: Thongs of Virtue was first released on September 20, 2010. Gilbert described DeathSpank as being "Act I" in the story, and Thongs of Virtue as being "Acts II and III". However, it was later announced that Deathspank was returning for a third game entitled, The Baconing, abandoning the titular character's name in its title. The third game was released on August 30, 2011.

DeathSpank has received generally positive reviews from critics, who cited influences from both the Monkey Island and Diablo games. At aggregate website GameRankings it holds scores of 78.88%, 79.50%, and 79.60% for the PlayStation 3, Microsoft Windows, and the Xbox 360, respectively. The Xbox 360 version has sold over 91,000 units as of year-end 2010, with 2011 totals exceeding 122,000 units. The PlayStation 3 version has similar numbers, with year-end 2010 totals of nearly 107,000 units.

DeathSpank is an action role-playing game which also features elements from graphic adventure games. Combat gameplay is similar to Diablo. Players can acquire several pieces of armor and weaponry, each with different abilities and attributes. During combat players can chain attacks in combos, which in turn deal more damage with each hit. As more hits are gained on enemies, DeathSpank's Justice Meter will fill. Once full, the player can unleash more powerful attacks for a limited time.

In-game conversations with non-player characters are also a large part of the game. DeathSpank features advanced dialog options, similar to LucasArts' Monkey Island series which play a large part in unfolding the game's story. These conversations may lead to quests for DeathSpank. In all, the game features 79 side quests in addition to the 33 quests required to advance the main plot. Once the game is completed the player can return and complete any unfinished side quests.

DeathSpank is designed to be playable in short segments, and has three difficulty levels. It contains about 8 to 12 hours of gameplay depending on choices made by the player during the game. The world of DeathSpank is presented as a miniature planetoid, with the display having a rounded element, similar to Super Mario Galaxy. The world is a mixture of 2D and 3D props on 3D terrain, and is rendered without load screens as the player moves between areas. The game also features a local cooperative mode, in which the second player takes the role of Sparkles the Wizard. Sparkles is equipped with multiple spells which provide support to DeathSpank, including a healing spell.

DeathSpank is set in a fantasy medieval world. It revolves around a character named DeathSpank, who has searched his entire life for an item known as The Artifact, a mysterious object whose purpose is equally mysterious. He travels with a wizard known as Sparkles, and the duo seek to claim The Artifact and rid the land of evil. The story begins with The Artifact just out of DeathSpank's reach. Unable to claim it, he meets with a local witch, who promises to help him in exchange for his services. He provides her with her requested items, and eventually obtains The Artifact.

The victory is short lived, however, as a group of henchmen who serve the evil Lord Von Prong steal The Artifact and all of DeathSpank's equipment. Traveling to a nearby town, he earns new weaponry from the townsfolk in exchange for doing good deeds. Re-equipped, he sets his sights back on The Artifact and Lord Von Prong. After a lengthy journey with several side quests throughout various locations, DeathSpank faces off against Lord Von Prong. He defeats Von Prong, and DeathSpank ends with a prelude to the game's sequel.

DeathSpank was first confirmed on January 9, 2008 via a press release. The release stated that game designer Ron Gilbert would be joining forces to develop the game. Gilbert described it as "Monkey Island meets Diablo." Three cinematic teaser trailers for DeathSpank were shown at Penny Arcade Expo 2008. During the 2009 Penny Arcade Expo DeathSpank was showcased at the Hothead Games booth, with live gameplay being demonstrated by staff, along with examples of story elements, and dialogue trees. It was announced on March 4, 2010 that Electronic Arts would publish the game.

The game was released on July 13, 2010, on the PlayStation Network and July 14, 2010, on Xbox Live Arcade. It was later released for Microsoft Windows on October 26, 2010, and on Mac OS X December 14, 2010. The PC and Mac OS X versions support a wide range of resolutions, the ability to run the game windowed, input by keyboard and mouse as well as gamepad, alternate control schemes, and a key mapping ability. Gameplay enhancements based on feedback from the console versions include an equipment comparison function, a treasure chest feature in each town and major area, a new streamlined user interface and more. These versions also make use of Steam's cloud saving and achievement functionalities and leaderboards.

In an interview with Gamasutra in June 2008, Gilbert stated that DeathSpank would be an episodic series of games. On March 30, 2009, Ron Gilbert confirmed on his blog that the game would no longer be episodic. Gilbert later revealed that the game had once again become episodic due to the game's size. "Towards the end of production it was determined what we had built was too big for a downloadable game, so the decision was made to split the game in half and the climactic battle with Lord Von Prong was the perfect place. That battle is in essence the end of Act I and it had a nice WTF moment that provided a nice cliff hanger" he stated. Gilbert has described DeathSpank as being "Act I" in his story, and Thongs of Virtue as being "Acts II and III".