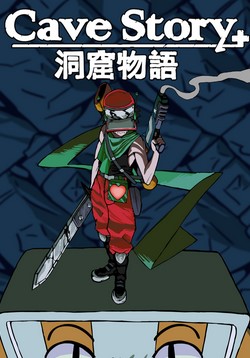 Cave Story (洞窟物語 Dōkutsu Monogatari) is a Metroidvania platform-adventure video game released in 2004 for Windows PCs. It was developed over five years by Japanese developer Daisuke "Pixel" Amaya in his free time. Cave Story features 2D platform mechanics and is reminiscent of the games Amaya played in his youth, such as Metroid and Castlevania (both from 1986). After its initial self-published release, the game slowly gained popularity on the internet. It received widespread critical acclaim for many polished aspects of its design, like its compelling characters, setting, story, and gameplay. Cave Story is considered by many as the quintessential indie game because of its one-man development team and influence on the gaming world.

The fast-paced gameplay of Cave Story revolves around Quote, a robot who wakes up suffering amnesia who must explore and blast his way through cavernous areas in order to figure out who he is and what he is and his backstory. The character gains access to new areas as he powers up his weapons and solves various platforming puzzles. Quote speaks to non-player characters scattered around the game world in order to learn more and more about the world and its inhabitants.

The player controls the on-screen character directly using the keyboard or gamepad. The player progresses by navigating platform game puzzles and shooting enemies with the equipped weapon. When the player collects multiple weapons, they may be toggled at any time with the press of a button. Defeating enemies sometimes yield yellow triangular objects, which give experience points to weapons when collected. Weapons may be improved up to level three, but taking damage causes weapons to lose experience and levels. Health and missile capacity upgrades are scattered throughout the game world. The player must interact with a variety of non-player characters and objects to complete the game.

Cave Story takes place within the cavernous interior of a floating island. The island is populated by Mimigas, a race of sentient, rabbit-like creatures. A particular species of red flower that grows in the island causes the normally peaceful Mimigas to fall into a violent frenzy when ingested. The island also conceals an artifact called the Demon Crown, which has vast magical powers. An army of robot soldiers was sent to the floating island on a military expedition, seeking to harness the Demon Crown as a weapon for wars on the surface world. These robots slaughtered Mimigas indiscriminately in their search for the crown, but were defeated when the Mimigas decided to eat the red flowers as a last resort. Shortly before the game begins, Professor Booster, the Sakamoto family, and various assistants formed a scientific party to research the island, but they became stranded when their medical doctor managed to acquire the Crown: he then forced the expedition to search for the red flowers.

The character awakens in a cave with no memory of how he came to be there. He finds a village of Mimigas, who are being persecuted by the Doctor. The Doctor's servants Misery and Balrog are looking for Sue Sakamoto, a girl who had been transformed into a Mimiga. Not finding her, they mistakenly abduct another Mimiga named Toroko instead. The player finds Sue in the Egg Corridor, where she discovers the eggs of a Sky Dragon, which could allow her to escape the floating island if hatched. Sue attempts to rescue her brother Kazuma, but King, the leader of Mimiga Village, captures her and holds her responsible for Toroko's kidnapping. Sue tasks the player with retrieving Kazuma from Grasstown. After freeing him, they meet Professor Booster, who reveals that the Doctor plans to use the red flowers on Mimigas to create an army to take over the surface world. Booster sends the player to the Sand Zone to destroy the red flowers before the Doctor can find them. While there, the player meets Curly Brace, a female robot who also has no memories of her past, and Jenka, an old witch who is Misery's mother and guardian of the red flowers. Jenka calls the player character a "soldier from the surface", one of many who were sent to the island to slaughter the Mimigas. Balrog manages to steal the key to the warehouse containing the red flowers from Jenka, who urges the player to stop them. Before the player can reach the warehouse, however, the Doctor force-feeds the captured Toroko a red flower and gravely injures King, leaving the player to fight the rabid Toroko, who ultimately dies. Misery banishes the player to the Labyrinth deep inside the island as punishment for interfering with the Doctor's plans. Curly Brace has also been thrown into the Labyrinth and they cooperate to escape. Balrog helps them to move the boulder blocking the exit, revealing his kind nature. The pair find and defeat the Core, a magical creature whose power keeps the island afloat. However, the Doctor steps in to save it before the island collapses. Depending on certain conditions, the player may rescue Curly Brace, who had sacrificed her air tank to save the player character. When he returns to Mimiga Village, he finds that the Doctor has captured the Mimigas. In the Egg Corridor, Kazuma offers the player a choice to escape the island with him using a Sky Dragon, leading to an alternate ending in which the Doctor conquers the surface world while Kazuma and the player hide in the mountains. The player may instead choose to confront the Doctor and destroy the island's Core, which would return the Mimigas to normal. The player scales the outer wall of the island to reach the Plantation where the Doctor is using the Mimigas as slave laborers to grow red flowers. The Doctor's servants capture the player and place him in a jail cell with Sue. She is taken away before the player wakes up, but her letter reveals that the Doctor was a member of the research expedition that included Sue's family and Professor Booster, but he betrayed them once he found the Demon Crown. Sue directs the player to find her mother who may have a plan to stop the Doctor.