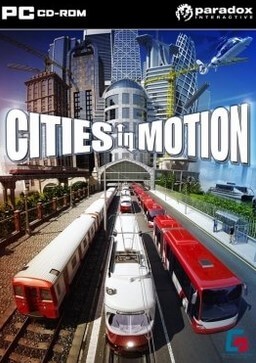 Cities in Motion is a business simulation game developed by Colossal Order and published by Paradox Interactive. It was released for Microsoft Windows on February 23, 2011, with OS X and Linux ports coming at later dates. The goal of the game is to implement and improve a public transport system in 4 European cities - Amsterdam, Berlin, Helsinki and Vienna. This can be achieved by building lines for metro trains, trams, boats, buses and helicopters.

The game is available for purchase on digital disc, download via Steam, and DRM-free download via various other distributors.

On May 19, 2011 Paradox Interactive announced Cities in Motion: Tokyo, an expansion containing a new city, Tokyo, and campaign, new vehicles and the introduction of the Monorail to the game. Tokyo was released on 31 May 2011. A second expansion, German Cities, was released on 14 September 2011. It contained 2 new cities, Cologne and Leipzig. A poll on the game's Facebook page made the city of Munich a free download for all users in addition to the expansion pack. During their Holiday Teaser, Paradox Interactive released a photo of the Statue of Liberty with the title Cities in Motion. U.S. Cities was soon revealed in a press conference in January 2012. The game was released 17 January 2012, featuring New York City and San Francisco as the two new cities. In addition, 5 new vehicles and 2 new methods of transportation were added to the game, making it the largest expansion yet.

On May 20, 2011 Paradox Interactive released the Mac version of Cities in Motion.

A port of Cities in Motion to Linux was announced by Paradox Interactive in 2013, with it eventually arriving via Steam on January 9, 2014.